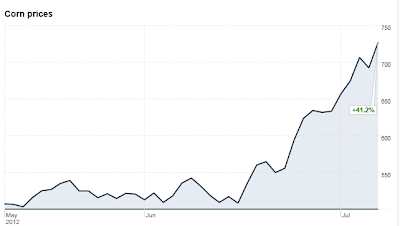 The extreme heat and drought in the US have cast doubt on the corn harvest, abruptly driving up prices. A useful reminder that, while the continental US comprises only 1.5% of the Earth's surface, we produce 10% of the world's wheat and 20% of the globe's beef, pork, and lamb. And last but not least -- fully half of the world's corn crop, which is America's single bestselling crop.

So this little spot of warm weather we've been having has serious potential consequences for food security around the globe. Which is the problem of global warming in microcosm; it would never be a good idea to radically alter the world's climate to something hotter than any time since we came down to from the trees. But to do so at a time when seven billion people are depending on a complex, interdependent global economic system -- a delicate clockwork mechanism to which we are applying a sledgehammer of abrupt, radial warming -- that is a special kind of idiocy. And we will all pay a price for it.

The USDA is going to release an updated harvest forecast tomorrow. Here's hoping for good news.

Nor is that all. Expected soybean yield were cut by 8%, and the estimated global wheat harvest was cut by 8 million tons.