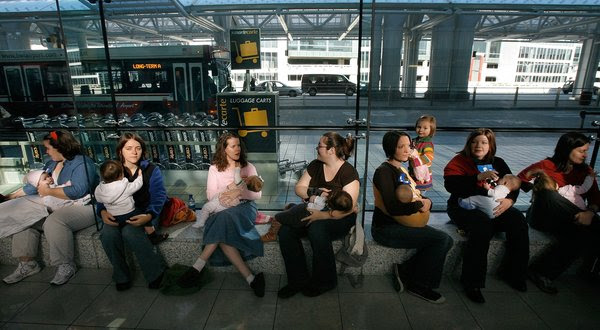 I have been doing this for a fair bit of time now (300th post!), and one of the interesting things about climate denial is that it is really just a special case of science denial, which in turn is a noble constellation in the wider universe of conspiracy theories. Science denial uses certain fallacies and appeals to emotion in predictable ways. Whether the subject is global climate change or breastfeeding infants, the same tropes proliferate.

Alissa Quart's "The Milk Wars" is an instant classic of the genre. At issue is a basic scientific fact; infants that are breastfed exclusively do better than their formula-fed peers:

The risk of hospitalization for lower respiratory tract infections in the first year is reduced 72% if infants are breastfed exclusively for more than 4 months. However, infants who exclusively breast- feed for 4 to 6 months have a fourfold increase in the risk of pneumonia com- pared with infants who exclusively breastfeed for more than 6 months. Exclusive breastfeeding for more than 3 months reduces the incidence of otitis media by 50%. Serious colds and ear and throat infections are reduced by 63% in infants who exclusively breastfeed for 6 months.
Any breastfeeding is associated with a 64% reduction in the incidence of nonspecific gastrointestinal tract infections, and this effect lasts for 2 months after cessation of breastfeeding.
A reduction in leukemia is correlated with the duration of breastfeeding— acute lymphocytic leukemia is reduced by 20%, and acute myeloid leukemia is reduced by 15% in infants breastfed for 6 months or longer.

Long-term health outcomes are affected by duration and/or presence of breastfeeding in infancy. The incidence of type 1 diabetes is reduced 30% in infants exclusively breastfed for at least 3 months. A reduction of 40% in type 2 diabetes also is reported, possibly reflecting the long-term positive effect of breastfeeding on weight control and feeding self-regulation. Celiac disease is reduced 52% in infants who were breastfed at the time of gluten exposure.

So, breastfeeding is optimal, although in any given case, it may be necessary to supplement with formula or formula-feed exclusively. Some mothers can't breastfeed, or have health problems or take medications (like seizure medications) that make it a bad idea. Society often does not support mothers who need to breastfeed or pump. But when babies can get breast milk, they are healthier.

Such are the facts. But Ms. Quart downplays facts, and emphasizes her feelings, which she takes to be deliberately provoked by others:


MY daughter was 2 days old, and dropping weight. I had been trying to feed her, but for some reason she wasn’t yet getting the liquid gold of colostrum, the earliest mother’s milk. When the hospital’s doctor paid his daily visit and mentioned her weight, my husband asked whether we should supplement with formula, gesturing at the little Similac bottles of hospital swag with the desperation of a business traveler eyeing vodka in the minibar — and with much of the same shame. The pediatrician swiftly confirmed our fears, intoning, “Formula is evil.” He was implying we were quasi-negligent for even considering it.

First we have a worry stemming from not knowing as much as she thinks she does: two-day-olds are supposed to be losing weight. Newborns lose weight for the first week of life; it's the way they're built. Nothing abnormal about that at all.

The physician, in colorful language, condemns formula, though he apparently mistook his audience for people with a sense of humor (I have often made the same mistake) or he would not have called formula "evil." Nevertheless, the author's sense of being deliberately judged is over the top: "He was implying we were quasi-negligent for even considering it."

If you don’t drink the Koolaid, you are committing crimes against nature or you are a racist or a terrorist. Guilty on all counts!

Jim is actually talking about climate denial, not breastfeeding, but the sense of paranoia is the same. What is lost is the sense of the facts as facts that have to be dealt with. Instead the author focuses on how those facts make her feel. She tries to invoke a sense of being threatened and belittled; the power of those emotions, if she can persuade her readers to share them, will dwarf any impression the scientific evidence can make.


Nevertheless, fewer than half of American babies are breast-fed for six months. I understand why. Breast-feeding exclusively for the first year is just not feasible for many women, who sometimes get six weeks of paid maternity leave but often get none. Choosing formula as a supplement is reasonable, given this reality. Yet, however worthwhile nursing may be, the heightened pressure to breast-feed creates shame in those who don’t manage to do it, and today’s lactation rhetoric erroneously implies that nursing is the most crucial thing you can do for your infant’s welfare.

After invoking the "shame," now it's time for the straw man: "lactation rhetoric."  It's so overstated and overblown. Did you know they say nursing is the most crucial thing you can do for your infant's welfare? Who are "they"? The lactation rhetoricians, of course.

And you can probably find this point of view expressed somewhere online. Not by the American Academy of Pediatrics, though; they know better. Breastfeeding is a good thing for a child's health, but if you ask a doctor who cares for kids what the most crucial thing you can do for a child's welfare, I think most of them would say "don't shake the kid." (Now, if they look you up and down and say "birth control," that would be an example of a doctor that doesn't think well of you.)

After the straw man, the science denier usually feels they need to offer some explanation for why people are deluded enough to belief differently than she does. Whether it's the "Socialist World State" or "rent-seeking scientists," there needs to be a reason why the other side exists and has gone to the great trouble of confusing the public about it:


The current fascination with breast-feeding is also an extension of a society’s efforts to control risk, including risk to our children. Mandatory, exclusive breast-feeding is, in this thinking, a kind of harm-reduction or abatement. It’s part of a collective dream of reducing all danger to nil. It’s also fueled by an idealization of the natural in a world that is ever more artificial.

I tend to think cutting your child's risk of getting diabetes by a third and cutting their risk of ear infections in half is objectively pretty awesome, but doubtless this is because I am "idealiz[ing] the natural world."

As so often, there's a conversion story in which the unhappy believer (in breastfeeding) finds an online authority and is transformed into a happy skeptic:


I discovered Dr. Amy Tuteur, whose site is called The Skeptical OB. She worked for seven years as an obstetrician and gynecologist, some of that time at Brigham and Women’s Hospital in Boston, then quit in the mid-1990s to raise four children.  On her site, which she says draws about a million visitors a year, she attacks the new nursing and birth orthodoxies among upper-middle-class women. Among some online, she is more despised than the Tiger Mom. (Recently there was a critical article about her on Slate.) “We’ve moralized breast-feeding,” she told me when I met her for an interview. She argued that it is less important than its advocates claim. She cited a 2008 study in the journal Pediatrics, in which the authors concluded there was no “evidence of risks or benefits of prolonged and exclusive breast-feeding for child and maternal behavior.”

The joy of finding an "expert" on the side of the issue one has already invested in! The "skeptic" so suspicious of arguments from authority, is suddenly star-struck by her expert and her one study, which doesn't really say what she thinks it does.

Ms. Quart, Lomborg-like, does not go so far as to pretend breastfeeding is not best. Instead, she uses her straw man to argue that the stress laid on breastfeeding is hysterical and overblown, which comes about because people are idealizing the natural world and trying to reduce risks to zero. But the most critical move is actually the very first one: by invoking the reader's sense of guilt and shame, and arguing "they" are deliberately and maliciously trying to provoke these feelings, the denier prepares the audience to swallow the rest of the story. Because who are you going to believe, this nice lady who understands how hard it is to be a mother, or those assholes that made her feel guilty (or ignorant, or afraid)?

Posted by TheTracker at 3:16 AM