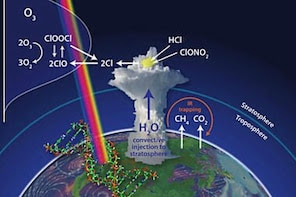 Strong summer thunderstorms that pump water high into the upper atmosphere pose a threat to the protective ozone layer over the United States, researchers said on Thursday, drawing one of the first links between climate change and ozone loss over populated areas.

Thus the NYT. From the abstract:


The observed presence of water vapor convectively injected deep into the stratosphere over the United States fundamentally changes the catalytic chlorine/bromine free radical chemistry of the lower stratosphere by shifting total available inorganic chlorine into the catalytically active free-radical form, ClO. This chemical shift markedly affects total ozone loss rates and makes the catalytic system extraordinarily sensitive to convective injection into the mid-latitude lower stratosphere in summer. Were the intensity and frequency of convective injection to increase as a result of climate forcing by the continued addition of CO2 and CH4 to the atmosphere, increased risk of ozone loss and associated increases in UV dosage would follow.

The questions this study poses raises are:

* Will stronger storms, one expected effect of global warming, seriously damage the ozone layer above the United States or other temperate or tropical regions?
* If so, how much damage?
* If the damage is serious, how much skin cancer for humans and animals? How much DNA damage to plants?

You can be certain that the final toll, whatever it is, is not factored in to any of the cost/benefit analyses of cutting greenhouse gas emissions. And you can be reasonably confident that "unintended consequences" like this will continue to bubble to the surface if, in less than an eyeblink of geologic time, we transform the Earth's climate into something last seen when dinosaurs roamed.

Nature is dangerous and powerful; that has not and will not change. But in the last 13,000 years of human history, humans have learned a great many of nature's dirty tricks and we have built a civilization around outwitting them. We help been helped in this by 8,000 years of extreme climate stability. All of our experience as a civilization, the some total of recorded history, all that we have managed to do in fostering health and prosperity in the teeth of indifferent nature have come during that flat line of global climatic stability.

Now we are changing the game to a game we've never played before and don't know the rules of. We are charging into the realm of the unknown unknowns, and even if we were to do everything right from this point, the coming centuries would be full of monsters of our own creation.

Posted by TheTracker at 2:03 PM