GISTEMP is in: 2014 is the hottest year; there's still a tiger in your bedroom

Warming continues to be closely in line with the trend since 1970: 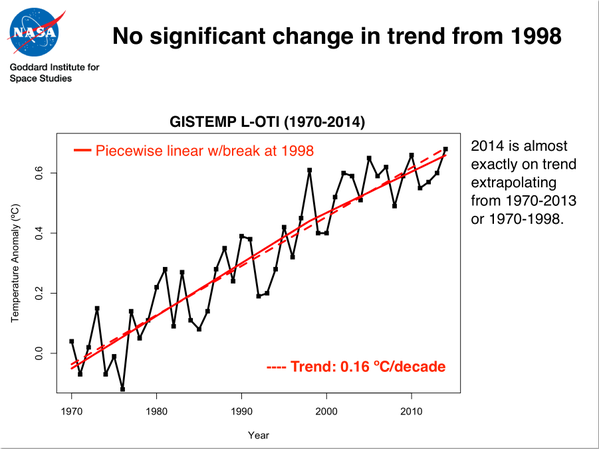 Many people have tried to explain this to climate deniers, who chose not to understand it (1). If anyone else is confused by it, this is the bottom line: you need to apply the same standard of proof to a hypothetical change in the warming trend as you would to determining the existence of a trend in the first place.

Having determined that there has been a warming trend of about 0.16C/decade for the 30 years between 1970 and 2000, the correct question is not has the warming stopped OMG (a question you will never be able to answer with a few years of data) but rather is there any reason to think the trend is different from what it was before?

If you determine there's a tiger in your bedroom, and then (wisely) don't go into your bedroom for a while, the test for whether there's still a tiger there in not whether you've heard it roar in the last 5 minutes. Unless you have convincing evidence, you probably should conclude that the tiger's still there, until and unless you get some strong evidence something has changed.


So, what is wrong with Cruz’s statement?  Well, assuming that by ‘recorded warming’, he means the satellite-derived lower atmospheric surface temperatures his statement is absolutely correct.  If he is referring to globally averaged surface temperatures since 2000, there is only a very small amount of warming; this small amount of warming is indeed contrary to the theory of AGW.

Posted by TheTracker at 4:39 PM No comments:

For Whom the Bell Tols: Hot Emotion, Denier Logic in Tol's Latest Screed


It means more or less rain, snow, wind, and clouds in various places. It means different outcomes for plants, whether direct or, since plants compete for resources, indirect. It means changes for the animals that eat those plants. And this includes changes for everything that hitches a ride on those plants and animals, and hence changes for all sorts of pathogens. Nature, agriculture, forestry, and health will all be different in the future. The seas will rise as water expands and glacial ice melts, affecting coastlines and everyone and everything that resides there. Water supplies will be affected by changing rainfall patterns, but water demand will also be altered by changing temperatures. Energy demands will change, too; there may be less need to heat houses in winter and perhaps greater need to cool them in summer. Traffic, transport, building, recreation, and tourism, too, will all feel the impact of a changing climate.

Unfortunately, his ability to think rationally about what that means is, well, disappointing:


For some, the mere fact of these impacts is reason enough for governments, businesses, and individuals to exert themselves to reduce greenhouse gases to minimize the change. That is strange logic, however. Change, after all, can be for the better or the worse, and at any rate it is inevitable; there has never been a lengthy period of climate stasis.

There are multiple levels of facepalm committed here. None are entirely new (the boring repetitive nature of climate denier is one of the reasons you do not see more debunkings here) but they are startling from the mouth of a once-respected economist.

Of course if changes in temperature of the magnitude we see unfolding today were common in human history, Tol might have a hint of a glimmering of a point here. But in fact, as he well knows, the entirety of recorded human history has taken place with the assistance of an 8,000-year period of highly stable climatic conditions -- what one might call a lengthy period of climate stasis.

So in fact, "Change happens" is meaningless as far as it is accurate, and inaccurate as far is it is meaningful.

But that trope is sagacity itself next to Tol's next fallacy:

Are we here seeing Tol preparing to abandon an unfulfilling career as an economist, and embark on a mid-life career shift to Platonic philosopher? Because it is philosophers who sit in their studies and worry themselves about self-evident truths derived from pure logic alone. Scientists, even of the dismal sort, are expected to look outside into the world from time to time.

What I can't get over about this essay is how much ignorance it express of basic economic principles, principles that Tol, as a trained and extensively published economist, should know in the marrow of his bones.

Do I exaggerate? Well, economic concepts do not get a lot simpler than sunk capital. Sunk capital means that once you've put your money into certain things, you can't get it back. It follows from that, as even a bright eight-year-old could grasp, that rapid changes in the environment pose a risk to sunk capital.

Tol's claim that the future of the climate is just as likely to be good for humans as it is bad would be applicable to the first human beings setting foot on a new world, presuming they knew nothing at all about it to begin with (an analogy I've explored before.)

But of course this is not remotely the situation we are in. Besides the fact that we know we can exist in this climate, and we don't know if we can exist, without a horrific die-off, in a world 3C or 4C or 6C degrees warmer, there is the additional problem, which I alluded to above, that we have trillions or dollars in sunk capital investments optimized for this climate, not a radically different one.

So the "Hey! Rapid radical climate change could just as easily be to something better!" argument makes no sense at all. And the nonsensical nature of the argument is emphasized with odd and completely irrational comparisons to deliberate progressive reforms: "With just as little logic, we might assume that women’s rights, health care, or education were necessarily better in the past"

Now the deliberate change of social rules and government policies to achieve a benefit is compared directly with a massive, unintended set of changes to the earth. What?


The climate of the 21st century may well be unprecedented in the history of human civilization; the number of people living in countries with free and fair elections is unprecedented, too. So what? “Unprecedented” is not a synonym for “bad.”

Does Tol perhaps think that he will appeal to the left with a facile comparison of environmental disaster to the progress of human liberty? Because make no mistake, he is raving. Biological arrangements aren't comparable to social structures. In biological arrangements, unprecedented is bad. If the doctor comes out of your mother's surgery to tell you that they found something "unprecedented," do you think you're about to hear something good about her prognosis?

Rapidly acidifying the oceans versus Thomas Paine publishing Common Sense. Expanding ranges of deadly tropical diseases versus the Voting Rights Act. Are they different? Are they the same? Is Tol seriously arguing this?

He goes on, invoking the shibboleth of "cheap energy" ("Cheap energy fueled the industrial revolution, and lack of access to reliable energy is one factor holding back economic growth in most developing countries" but without offering any evidence for either assertion.) Fundamentally, though, this essay represents a step away from Tol's lukewarmism and towards simple climate denial. For years he's published studies of the costs of climate change, studies which consistently found much lower costs than those of his peers. But fallacies like the above go beyond that. Now he seems to be plunging into outright blog scientist logic and advance-stage Curryism.