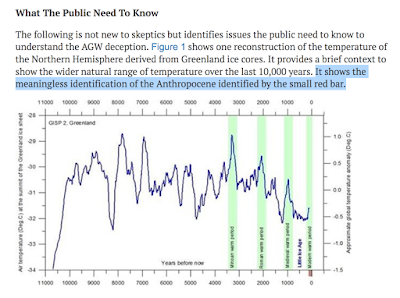 This deception was previously employed by Don Easterbrook: 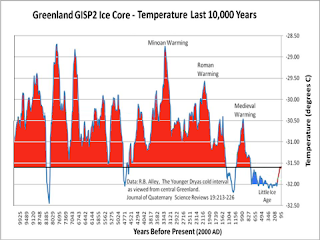 . . . regarding which, Skeptical Science has already pointed out the rather glaring denier falsehood:


Easterbrook plots the temperature data from the GISP2 core, as archived here. Easterbrook defines “present” as the year 2000. However, the GISP2 “present” follows a common paleoclimate convention and is actually 1950. The first data point in the file is at 95 years BP. This would make 95 years BP 1855 — a full 155 years ago, long before any other global temperature record shows any modern warming. In order to make absolutely sure of my dates, I emailed Richard Alley, and he confirmed that the GISP2 “present” is 1950, and that the most recent temperature in the GISP2 series is therefore 1855. . . .


Unfortunately for Don, the first data point in the temperature series he’s relying on is not from the “top of the core”, it’s from layers dated to 1855. The reason is straightforward enough — it takes decades for snow to consolidate into ice.

Of course both Easterbrook and now Ball are also playing that ever-popular denier game of pretending one regional temperature record can stand as a proxy for global temperatures. But what really touches the nonsense into immortality is treating 1855 temperatures as modern-day temperatures, and denying global warming on that basis.

Have the razor-sharp critical intellects at WUWT picked up on this rather obvious deception? Not in the first hundred comments, which are mostly deniers arguing about whether warming is caused by a 100,000-year-cycle (rather than CO2) or a 21,000-year-cycle (rather than CO2). Tom Dayton points out the obvious, but "AndyG55" is ready with his unanswerable comeback: Michael Mann is a stupidhead LOL: 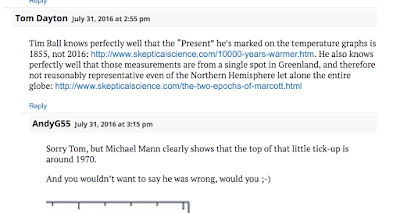 Steve McIntyre splits the baby in his own inimitable style, warning deniers away from the data set without stating the obvious point that YOU CAN'T REFUTE GLOBAL WARMING WITH A RECORD THAT STOPS IN 1855. 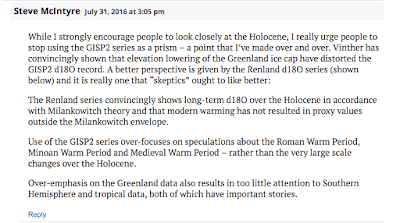 Other than that, it's the same old nonsense. Someone introduces the idea of a 41,000-year-cycle, so they chase that tennis ball for a while. Then, in response to some mealy-mouthed word salad by Easterbrook himself, Nick Stokes, who is somehow not banned from the monkey house, owns him and Steve McIntyre in one go: 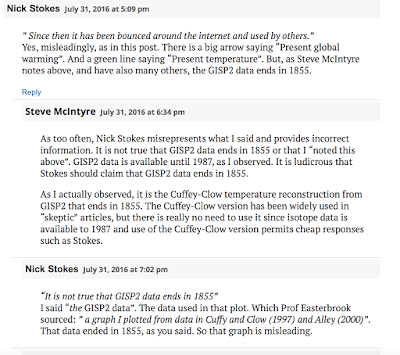 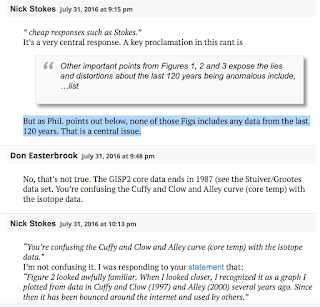 . . . and that actually shuts up these venerable patriarchs of weaponized ignorance. Bravo, Nick. Bravo.