Judith Curry: Please save me from my belief in +10C of warming


I haven’t found climate change risk assessments to be very satisfactory, for a range of reasons.  There is a new report out, entitled Climate Change: A Risk Assessment.  IMO  this is far and away the best risk assessment for AGW that I have seen. . .

Exciting! So what does the report say?

So "far and away the best risk assessment for AGW" Curry has ever seen considers +7C "more likely than not" along a business-as-usual pathway and feels that +10C "cannot be ruled out." Since this would obviously be a catastrophic outcome, Dr Curry goes on to apologize to the scientists she has vilified and pledges to turn her blog over to serious scientific study of AGW and educating the public about these risks.

Kidding! Instead she closes her post with a frankly pathetic plea for someone to please find her a way out of the logical consequences of the report she's just endorsed:


The plausible worst case scenario is arguably where we should focus our efforts (both science and policy).  Working to falsify high values of RCP and sensitivity based on the background knowledge that we do have, should be a high priority.

So the takeaway is that the best risk assessment Dr Curry has ever seen considers +10C as a plausible worst case scenario. Said risk assessment recommends constructing policy around the plausible worst case scenario, and Curry agrees with that too. Her conclusion: I do not like where this science leads, so somebody find me some new science that leads us where I want to go (which is nowhere.)

If someone could find a way out of the logical consequences of her own beliefs and the basic science, she would be eternally grateful to you. In the meantime she will wait patiently and not draw any conclusions until the facts change (1).

Since you can't ethnically cleanse the facts of radiative physics, the same strategy will probably not work for Judith.
Posted by TheTracker at 11:39 AM 14 comments: 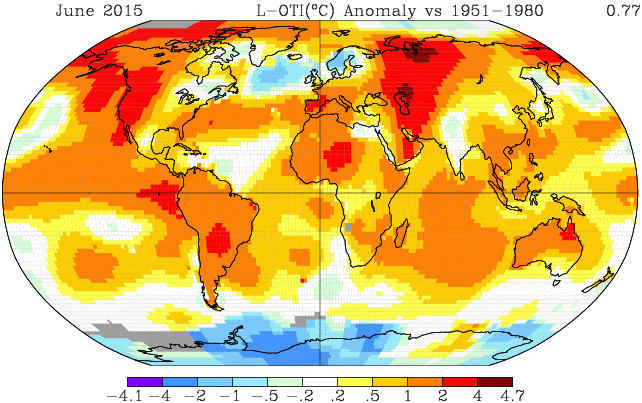 A couple of months ago, NOAA had declared a long-awaited El Nino event, after an unprecedented 54-month Nino-less period with two declared La Ninas and multiple abortive flirtations with El Nino status.

Their longstanding requirements for El Nino require at least five consecutive three-month averages at or above +0.5C. The new El Nino, as we've seen, inspired some commentators to literally incoherent levels of excitement:

Eric Holthas' unstoppable global juggernaught looked like this in the NOAA data:

And if you're thinking that looks pretty tame compared to the other El Ninos since 2003, you're right. In fact, those months were so marginal that they have now slipped out of El Nino status altogether. A few weeks ago NOAA made a quiet adjustment to its January-Febuary-March numbers, downward by 0.1C. This had the somewhat starting result of disappearing El Nino from NOAA's data:

Instead of a El Nino entering its eighth month, we now have two 3-month averages on either side of a Nino-spoiling 0.4C January-Febuary-March.

This means that when NOAA re-welcomes El Nino in a couple months, we will have had gap of 58 months, just a hair under 5 years, between El Nino events. Whereas the prior record was just 52 months (1959-1963, if you're curious.)

There is no serious point to this, other than the fact that scientists reassess and adjust data sets all the time, as better information becomes available. It's not the mark of a grand conspiracy to control a narrative, just researchers going about their business -- so routinely that a change like this can go almost unnoticed.
Posted by TheTracker at 5:54 PM No comments:


But like it or not, offshore wind is now the only scalable form of renewable energy in Britain. Solar and onshore wind are not. This leaves us with three choices as far as low carbon electricity is concerned: nuclear, offshore wind and CCS. Nuclear is currently much cheaper than offshore wind, and this is not likely to change tomorrow. So, forget about calling nuclear expensive, and be more honest and say that de-carbonisation is expensive. If nuclear energy is expensive then it is time we lowered our expectations when it comes to climate change, because cheaper options are not staring us in the face.

While Wilson's tone is more dismissive of renewable energy than I would be, I substantially agree with his point -- calling nuclear energy expensive whilst supporting heavy investments in wind, solar, and other non-hydro renewable energy often amounts to the pot calling the kettle black.

Getting our emissions down to 20% or 10% of present-day emissions is going to cost quite a bit of money. In the long run, that investment will pay off. Even in the short run, there are substantial benefits to be had in the form of improved air quality, better transportation networks, more efficient and reliable energy grids, and so on. But there is no getting around the fact that the cost will be several trillion dollars (which, it should be pointed out, is still a tiny share of the world's wealth.)

While renewable energy is getting cheaper, it is the worst kind of motivated reasoning to think that it will continue getting cheaper indefinitely along a linear trend. While intermittancy at high levels of renewable penetration is a problem that can certainly be overcome, fixes all involve additional investment and increased costs.

Smart government policies can make renewables cheaper -- by supporting research into new technologies, encouraging adoption on a wide scale, and by making changes to the utility model and the grid such as dynamic pricing which favor the development of more renewables.

Similarly, though, a smart set of policies could make nuclear energy much cheaper. Settling on a single standard design, providing a steady stream of orders for that design, and streamlining regulatory approval after the initial instances of that design, could bring costs down dramatically. Whether or not you think the US government was right to commit itself to the long-term storage of nuclear waste, it did make that commitment and ought to settle on a site and answer that question once and for all.

Whatever low-carbon energy sources are the most successful, we ought to resign ourselves to spending some serious cash up front. Hydrocarbons are a very efficient way to store energy, and I very much doubt if any alternative energy source in our lifetimes is going to be easier than just pumping the stuff out of the ground. Renewable energy advocates who decry the expense of nuclear energy are sharpening the sword that will be at their throats for the foreseeable future.
Posted by TheTracker at 7:23 AM 1 comment: