I have an idea that I've alluded to here before and which I've been trying to explain on Twitter but which requires -- a bit -- more than 140 characters to explain.

Here it is in a nutshell: fossil fuels could make great grid-scale batteries.

The problem is this: many clean energy sources are either intermittent (solar, wind) or have the opposite problem, being "fixed" (difficult to adjust to demand) like nuclear or geothermal. This is in contrast to, say, a modern natural gas plant, which can easily adjust its output minute by minute to match the demand.

Conventional batteries continue to get better and cheaper, but right now their capacity is orders of magnitude below what would be needed to store, say two or three weeks of energy.

However we do have a large amount of energy storage in the form of fossil fuels: liquid, solid, and gas. This form of storage is stable on geological time scales and extremely energy dense. Unlike many of the alternatives, including chemical batteries, capicators, pumped hydro storage, or molten sodium, the infrastructure to store and release hydrocarbon energy is simple and cheap -- in the case of petroleum, it can be as simple as a barrel or a hole in the ground.

The storage capacity of the German natural gas network is more than 200,000 GW·h which is enough for several months of energy requirement. By comparison, the capacity of all German pumped storage power plants amounts to only about 40 GW·h (Wikipedia).


These are some of the reasons, of course, why fossil fuels have dominated our energy mix for so long (especially in the transport sector) and threaten to do so for many decades to come. But in using synthetic fossil fuels intended to store power, rather than provide power, we might be able to sidestep the disadvantages of these fuels, whilst retaining some of the crucial benefits.

Start with a conventional gas plant equipped with carbon capture technology (assuming we ever get serious about perfecting and deploying that technology.) Then, rather than put the CO2 in the ground, feed it into a synthetic natural gas plant and use a clean energy source to turn the CO2 back into gas. Burn, capture, and un-burn as needed in a closed cycle that doesn't release CO2 into the atmosphere.

Such a program assumes an abundance of clean energy [1], since carbon capture and synthesizing natural gas both require large amounts of energy relative to the energy stored in the final product. It can easily accommodate intermittancy as well as fixed or semi-fixed outputs. Since you can package and ship fossil fuels, this also means that the generation capacity can exist far from where the power is needed.

Another advantage is that this repurposes infrastructure we already have. We already use natural gas plants to adjust output to demand. We already have literally hundreds of billions of dollars of global infrastructure dedicated to the storage, transport, and burning of fossil fuels. Using hydrocarbons this way would simply mean that we stop pulling them out of the ground and recycle the emissions back into fuel. Much of the same infrastructure could be used.

I still think you would want a smart grid, dynamic pricing of electricity, HVDC networks, and some battery (or battery-like) grid-scale storage. These might function well enough that you wouldn't need this work-around on a regular basis. But it would be available to you if, say, there was a prolonged period of low solar output, or low wind output, or if a nuclear disaster led the government to shut down some or all of the nation's nuclear reactors.

--------
1. If we estimate that capturing the CO2 require 30% of the energy of burning the gas, and turning CO2 back into gas requires 120% of that energy, you'd need about 1.5MWh of clean energy for every MWh of emissions-free syngas.

Whether or not you think growth in nuclear power is a smart play -- I think, on balance, it is -- nuclear energy production declining in absolute terms is bad, bad, bad news. It's going to eviscerate efforts to cut CO2 emissions via RE. You are going to end up -- as Germany has -- substituting low carbon renewable energy for low carbon nuclear energy. Leaving fossil fuels dominating the energy mix for decades to come. No es bueno.
Posted by TheTracker at 5:46 PM 7 comments:

Siemens has just installed a wind turbine with a 154-meter rotor. This is an exciting development because the higher you go, the harder and steadier the wind blows. A report by the US National Renewable Energy Laboratory (h/t The Economist) recently looked at the new generation of giant turbines in terms of the areas they open up for productive wind farms: 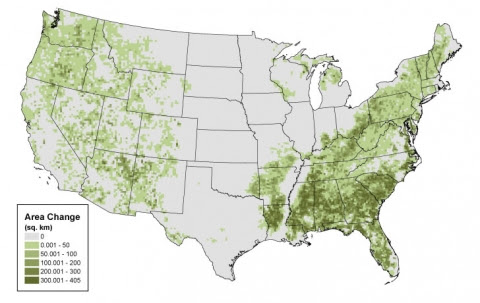 They made this calculation by assuming a need for a gross capacity factor of 30%. The larger turbines achieve that over a much larger area than those in common use today.

I'd be interested as to the average capacity factor of these larger turbines in areas with optimal wind conditions. Danish offshore wind farms average a capacity factor of about 40%, compared to a US average (consisting overwhelmingly of onshore turbines) of 29%. However, the wind behaves differently over oceans as opposed to on land. It's probably reasonable, as a back-on-the-envelope calculation, to suppose that onshore installations the size of offshore turbines would achieve a capacity factor that would be intermediate between the two.

Improvements in photovoltaic cells get a lot of press these days, but it is worth noting that wind energy is not a stable technology either. It is rapidly getting cheaper and more productive. Now if we as a country would invest in a grid that can ship power cross-country and manage demand with dynamic pricing, you could really see renewable energy explode.
Posted by TheTracker at 4:19 PM 3 comments: