Air conditioners all the way down 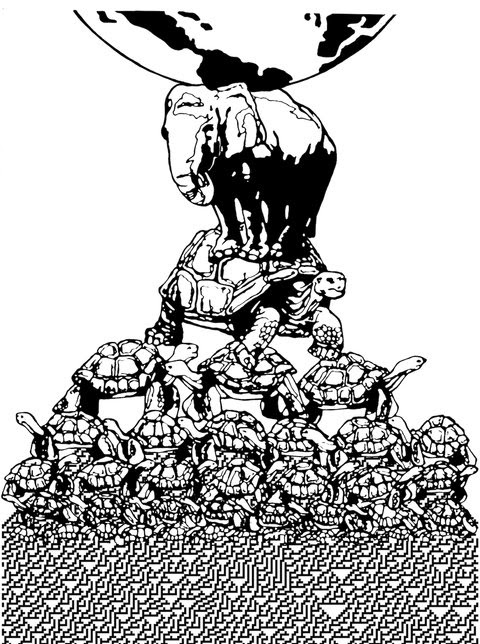 A well-known scientist (some say it was Bertrand Russell) once gave a public lecture on astronomy. He described how the earth orbits around the
sun and how the sun, in turn, orbits around the centre of a vast collection of stars called our galaxy.

At the end of the lecture, a little old lady at
the back of the room got up and said: "What you have told us is rubbish.
The world is really a flat plate supported on the back of a giant
tortoise."
The scientist gave a superior smile before replying, "What is
the tortoise standing on?"
"You're very clever, young man, very clever,"
said the old lady. "But it's turtles all the way down."

I came across this interesting inaction rationale in the latest Economist analysis of Durban:


Recent work by, among others, Michael Greenstone at the Massachusetts Institute of Technology backs that approach. It shows that hot spells kill few people in air-conditioned America; but in India, where 300m have no access to electricity, the death toll is huge. India’s priority is to provide its people with electricity, and one day air-conditioners. That this will increase its emissions is less a problem for India than for the world. It therefore views any suggestion that it should be bound to curb its emissions as a threat.

Assuming that is indeed a line of argument in India (and the Economist is usually quite reliable) I was interested in how practical this approach might be, so I did some back-of-the-envelope calculations. Readers should feel free to point out obvious errors. Here we go:

There are about 1.2 billion people in India. That number is expected to rise to 1.6 billion by 2050. Let's say we want to protect them from global warming by providing them with central air in their homes and businesses (we could preserve their lives by, say, cooling a single room in their homes and making them all rest and sleep there, but let's assume they don't want to lead that sort of miserable existence.) Let's estimate about 200 million households needed residential air; there will probably be more than that by 2050, but let's be conservative. Some of them may live in cool regions; some already have air conditioning, factoring in to India's current power costs and greenhouse gas emissions, which for the record are:

We will also give them 50m commercial systems; they can't spend all day in their houses. We don't need people dropping from heat stroke in the factories, offices, the call centers and the banks.

Using this helpful wikipedia article, I estimated the residential systems would need about 3 tons of refrigeration, while I estimated the commercial systems very conservatively at 10 tons. One ton of refrigeration consumes 3,517 Watts whilst in operation (assuming an seasonal energy efficiency ratio (SEER) of 10). So residential systems consume roughly 10,000W, and commercial systems 35,000W (there is no point in false precision when we are throwing around estimates like this.)

So how much is that? Well, at eight cents a Kwh, that power will run you $300 billion dollars a year (20% of India's present-day GDP; even if the economy grew by 300% in short order, they would still be spending 5% of their GDP on air conditioners). But more importantly, at an average emissions density for fossil fuel electricity of 750g (I love wikipedia) that air conditioning generates greenhouse gas emissions of:

That's two and a half times India's current emissions. It's roughly 10% of the total global emissions in 2010. In other words, relative to the 80% emissions cut needed by 2050 to (hopefully) stabilize the climate in the short term, the CO2 emissions of Indian air conditioning would consume half of humanity's global CO2 budget.

The alternative is to keep emitting and keep warming -- and keep building air conditioners, and burning fossil fuels to power them, accelerating the warming further. Eventually we will need to run the air conditions harder, and longer, to deal with warming of +4C, +5C, or even more -- driving the cost and the emissions even higher (while we are also paying to resettle climate refugees, relocate coastal towns, and fight the spread of tropical diseases). Of course, we can't air condition our crops, we can't air condition every home in Africa or South America or the rest of Asia. But other than that, smooth sailing. It's air conditioners all the way down.

Posted by TheTracker at 9:16 AM