Every now and again, Anthony likes to cut-n-paste a science press release, to try and delude himself and his readers into thinking his website has something to do with science other than whining about it. Unfortunately, changing the subject merely serves to illustrate the pathetic science illiteracy and reactionary politics of his little band.

This should be easy. Not much is required of the commentors by way of response here. Scientists toiled for years in obscurity and today they leave their mark on history. Yay science! Unfortunately, this simple PR exercise is beyond the ken of Tony's tinfoil hat brigade.

Needless to say, "just get past…around 110" is not anyone's idea of how to synthesize stable superheavy elements, which is still very much a thing. But perhaps I am getting sidetracked from "JPS"'s main point, which seems to be: Scientists were wrong about an island of stability (wrong) so global warming is a lie!

Multiple dim bulbs simply reject the idea that anything has been discovered. It's just another hoax!

"Mark" one goes off on a weird tangent about element names, but "Mark" two stands ready to pull the discussion back to what the site is all about: 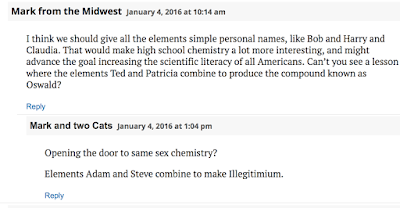 Having belittled homosexuals, the tinfoil hats decide it's time to bring up slavery and the New World Order:

I'd like to reiterate: this is a puff piece about a feel-good story about the discovery of new elements. But these deniers can't get through a simple press release on a totally non-climate-related subject without devolving into an anti-intellectual, homophobic, paranoid cri de coeur. It does not make one hopeful for their output of the course of the rest of this, an election year.
Posted by TheTracker at 3:48 PM 2 comments: