Stop the presses, lose your Twitter password, push over windmills with bulldozers, smash your rooftop solar panels with a tire iron. For Joe Nocera has found, at long last "A Real Carbon Solution." (Spoiler alert: It's coal!!!).

The specifics are quite interesting and hopeful. They're building a CCS (carbon capture and storage) plant in Texas. Texas being Texas, their "storage" plan, besides making some fertilizer, is to use the injected CO2 to extract more oil from dying wells.

Joe is excited by this. Finally, "Environmentalists could call off their war against the coal industry, thus saving tens of thousands of jobs."

That's a huge relief. War, as we know, is hell. I am particularly anxious for the war to be over because, as you may know, I impregnated a coal miner during an extended tour, and I am now trying to get her and my child out of the apocalyptic hellscape that is the West Virginia countryside, but it's hard to get seats on the last chopper out of Charleston.

Nocera recognizes that the status quo, that of thousands of "climate-destroying coal-fired plants," is destructive and wrong. But he has staked out a prominent position as a strong advocate for "climate-destroying" fossil fuel burning. To his credit, he does not pretend that CO2 emissions do not cause climate change or that climate change is not dangerous and destructive. But that leaves him with a couple of options, one more palatable than the other:

Let's hope this new experiment with CCS proves to be everything Nocera thinks it is, and more. The cynic in me expects that it, like most innovations, will take longer to build, cost more to operate, and be less perfectly effective than planned. The cynic would similarly like to place a small bet that Nocera and his ilk will soon after find a new miracle solution, which will again obviate in their minds the need to undertake collective political action to cut our emission, wunderwaffes notwithstanding.
Posted by TheTracker at 3:23 PM 3 comments:

I've let this space go dark recently, partly because my real job has been all-consuming for the last little bit, and partly because I was thinking about the direction I wanted to take this blog in future.

I started here in a fire of righteous indignation at the politically and ideologically driven science denial propagated -- chiefly across the web -- by those who wanted to sweep the problem of global warming under the rug. On that front, I and many others that took part in the struggle to reveal the true face of climate denial can declare victory, for victory it is when the public recognizes science denial as one facet of the polarized right's assault on American society, and they have.

I can pinpoint the moment I knew we'd won this battle. It was when Todd Akin's theories on pregnancy and "legitimate rape" blew up across the interwebs, claiming his political career as a casualty almost as an after thought. (Quick, what state did he lose his race in?) At that moment, it was crystal clear to everyone with eyes to see (that is, everyone not already sunk deep in this radical right-wing social movement) that a certain portion of the public had decided they could just make up science on the spot. And most people quite rightly recognize this as quackery. Mission accomplished.

Exposing quackery was all I ever wanted to do with this blog, and it stands exposed. Very well, but shoddy thinking in the name of the cause is an immortal enemy, and it will rise up as many times as it can be laid to rest. Nevertheless it still warrants some reflection about how best to go about fighting distortions and misinformation. Clinical psychologist Norbert Schwarz argues that repeating misinformation in order to debunk it may contribute to the problem.

Even if we can avoid reinforcing misinformation, the larger problem with approaching climate change from an attitude of refuting science denial is that, implicitly, it grossly exaggerates climate deniers' importance as an impediment to effective reductions in greenhouse gas emissions. 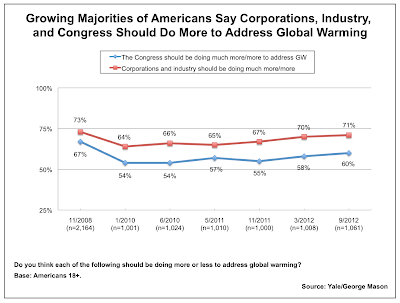 Sixty percent of the public wants Congress to act. Seventy percent want corporations and industry to get busy. But:

It's hard to find questions about climate change with the cost to the responder cooked in. People doing serious surveys of climate change attitudes don't tend to like them, and this question illustrates why: posit a cost of $15 a month, and our majority for climate action falls to a measly 39%.

That's the climate problem, right there. It's not a tiny minority shaking their little fists and demanding Mann be indicted. It's a broad majority that recognize climate change as a serious problem, but not so serious, or so pressing, that they are ready to vote for, and pay for, effective strategies to cut greenhouse gases. What seems like an exciting clash of intellect and science versus ideology and hokum turns out to be something much more familiar and prosaic: voters that see a long-term problem and prefer to procrastinate rather than make tough decisions with real costs. See also, infrastructure. See also, education. See also, healthcare.

It's not clear that dissecting the horrifically ill-reasoned and often just as ill-argued talking points of the climate denial movement helps move forward the ball towards getting the broader public buy-in we need for carbon taxes and such. Since normal, non-blogging people avoid bitter, divisive arguments -- rather than leaning into them -- attacks on climate deniers, however witty, may contribute to the majority's determination to avoid engagement.

I might retort that I do this for my own amusement and those of like-minded people, but that's not true. I want to have a positive impact, however small, on the discourse of climate change. Maybe arguing, provoking, and poking fun are not the best way to go about it. I put it to you, loyal reader, what is?