The Gulf Stream is an ocean current that modulates climate in the Northern Hemisphere by transporting warm waters from the Gulf of Mexico into the North Atlantic and Arctic oceans1, 2. A changing Gulf Stream has the potential to thaw and convert hundreds of gigatonnes of frozen methane hydrate trapped below the sea floor into methane gas, increasing the risk of slope failure and methane release3, 4, 5, 6, 7, 8, 9. How the Gulf Stream changes with time and what effect these changes have on methane hydrate stability is unclear. Here, using seismic data combined with thermal models, we show that recent changes in intermediate-depth ocean temperature associated with the Gulf Stream are rapidly destabilizing methane hydrate along a broad swathe of the North American margin. The area of active hydrate destabilization covers at least 10,000 square kilometres of the United States eastern margin, and occurs in a region prone to kilometre-scale slope failures. Previous hypothetical studies3, 5 postulated that an increase of five degrees Celsius in intermediate-depth ocean temperatures could release enough methane to explain extreme global warming events like the Palaeocene–Eocene thermal maximum (PETM) and trigger widespread ocean acidification7. Our analysis suggests that changes in Gulf Stream flow or temperature within the past 5,000 years or so are warming the western North Atlantic margin by up to eight degrees Celsius and are now triggering the destabilization of 2.5 gigatonnes of methane hydrate (about 0.2 per cent of that required to cause the PETM). This destabilization extends along hundreds of kilometres of the margin and may continue for centuries. It is unlikely that the western North Atlantic margin is the only area experiencing changing ocean currents10, 11, 12; our estimate of 2.5 gigatonnes of destabilizing methane hydrate may therefore represent only a fraction of the methane hydrate currently destabilizing globally. The transport from ocean to atmosphere of any methane released—and thus its impact on climate—remains uncertain.

A number of outlets have picked up on this story, and it's easy to see why. This is another classic we-thought-it-would-take-thousands-of-years moment. In recent years methyl hydrate deposits in the Arctic, and especially the shallow deposits in the East Siberian Arctic Shelf, have grabbed the spotlight. Another recent study made headline when it warned of large methane deposits under Antarctica. It seemed that methane was on the move North and South, and the poles grabbed most of the popular attention. But:

Methane hydrates are over over the place. Including places in the ocean dramatically warmed by shifting ocean currents. So there's that.

Key points from the study include:

1. Methyl hydrate deposits are being destabilized by warming oceans right now.
2. We don't know how much of this carbon will make it into the atmosphere, vs contributing to the acidification of the oceans.
3. The study looked at part of the North American coastline, but this process is likely unfolding in other parts of the world as well.
4. Reports of the death of the clathrate gun hypothesis have been greatly exaggerated. This is only one of many recent studies to illustrate that carbon-cycle feedbacks have the potential to add large amounts of greenhouse gases to the atmosphere. How fast? Not overnight, but not necessarily over thousands of years, either.
5. With vulnerable carbon stores in the Arctic, the Antarctic, and on the continental shelves in between, it is becoming painfully clear that anthropogenic global warming is a game of Russian roulette played with a semiautomatic.
Posted by TheTracker at 4:29 AM 10 comments:


This is a welcome reminder that the climate blogosphere is a tiny, tiny community, and the irrational, unpersuadable right-wing ideologues who relentlessly seek domination over it do not reflect the broader, disengaged public. Nor is the public responding to pro-science perspectives. If I had to guess, I'd say they are simply responding to the evidence that they are seeing with their own eyes. 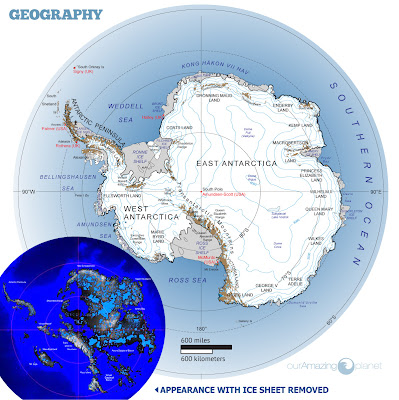