Lawrie Ayres says:
December 3, 2010 at 12:28 am
There have been suggestions from Cancun that we humans could consider carbon rationing, the introduction of wide spread diseases and mass suicide to protect the planet. While I wait for those making the recommendations to go first so we can see if their proposals are effective I suppose turning the Sahara into a giant PV is less threatening.

I missed out on an university education and so have had to live a reasonably sucessful life using common sense and observation. At no time have I realised that my very existence was causing such heartache to the learned. OTOH we could just ignore their ramblings as they cry for relevance.

They're really off somewhere in their own world, aren't they? I must have missed the exhortations to mass suicide and biological warfare at the otherwise tepid international conference at Cancun. But what really puts Lawrie over the top is the follow-on self-description: "I missed out on an university education and so have had to live a reasonably sucessful life using common sense and observation." Time for some remedial education.
Posted by TheTracker at 5:41 AM 2 comments:

. . . and speaking of forest fires 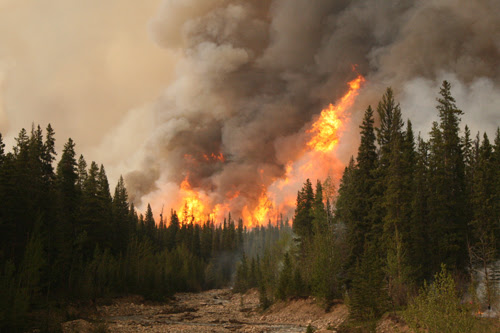 About half of the carbon dioxide we emit is taken up by the biosphere, cutting the rate of growth in atmospheric carbon dioxide by half. That will change. While catastrophic shifts like the explosive release of methyl hydrates are a frightening possibility, the smoldering (literally, in this case) CO2 feedbacks are already gradually reducing the net uptake and will eventually reverse it. Once that happens CO2 levels will continue to rise even if we stop all human emissions.
Posted by TheTracker at 8:30 AM No comments: