So it's time to talk about geoengineering. Like it or not.

The reality that a significant amount of carbon dioxide and methane are going to emerge from melting permafrost seems at last to be making an impression on the popular press (thanks latterly to a recent UN report). The implication, that it is extraordinarily improbable that mitigation alone will be able to limit warming to < 2C above preindustrial, does not seem to have sunk in yet, but the logic is fairly inescapable.

Investigations of climate sensitivity continue to come back with values clustering around 3C/doubling. Based on those values, the total amount of CO2 that can be added to the atmosphere and still leave us with the hope of keeping warming below the 2C target is about 1,000 gigatons or a trillion tons. Total CO2e emissions to date are between 500 and 600 gigatons. Permafrost emissions by 2200 are estimated to be between 246 to 415 gigatonnes. Take the midpoints of both ranges and add them together and you get 880 gigatons. Right now the world is adding to that figure at a rate of 30 gigatons of carbon dioxide per year, plus sundry other GHGs.

Even if you could instantly cut GHG production by 90%, you'd still cross the threshold within 40 years or so.  Any sort of a realistic program -- and in that I include a WWII-style crash program to cut emissions, consuming a significant chunk of the planet's GDP over the next few decades -- would come nowhere close to meeting the trillion ton target.

Taking the most likely case -- that scientists' warnings continue to fall on deaf ears for at least a half a decade -- we will commit ourselves absolutely in four to five years -- perhaps less, if the world economy grows at a brisk pace.

It's possible, of course, to stick with the party line despite the inevitability of crossing the trillion-ton mark. Emission cuts as fast as possible; adaptation; and hold on to something, because the 21st century is looking like a bumpy ride. But it is more in the spirit of climate realism to face the facts honestly and, where necessary, change our strategy.

What are those facts? Fact number one: carbon-cycle feedbacks will put the 2C target out of reach through mitigation alone. Fact two: the severity of the climate impacts we are seeing at 0.8C above preindustrial suggests the 2C is a hard target. Two and a half times the warming we have seen to date is already, probably, outside any reasonable boundary of "safe" temperatures. Fact three: the Arctic permafrost is not the only game in town. There is also carbon under Antarctica. There are methyl hydrates. There is carbon locked up in the Amazon and other forests vulnerable to die-back.

If you take the 2C limit seriously, you have to consider that the time may be approaching where we will need geoengineering as a bridge to lower levels of GHGs.

Geoengineering has a bad reputation. People fear it as a quick fix, a barrier to the changes we need, and a long walk off a short pier into the Bay of Unintended Consequences. It has the potential to be all of those things. But it seems increasingly unlikely that we will get through the next two centuries in one piece without it.

The AGM strategy has three elements:

Adapt: Prepare our defenses and infrastructure for multi-meter sea level rise and the storms of the 21st century. Prepare our water resources for droughts, salinization, and flooding. Prepare our emergencies services, diversify our food crops, improve the robustness (and efficiency) of our infrastructure.

Geoengineer: Start planning with small-scale tests now; larger-scale tests as soon as feasible; infrastructure for large-scale deployment as soon as we have a workable technology or set of technologies. Then set a hard upper limit well back from the 2C boundary -- like 1.5C, or at the first sign of a catastrophe like massive methyl hydrate degassing. At 1.5C over preindustrial, geoengineering kicks in.

Mitigate: Agreement to severe and ongoing cuts in GHG emissions between a few large powers, with serious diplomatic and economic arm-twisting as necessary to enlist the rest of the world. Our goal should be to get back to 350ppm CO2e

Could wildly successful geoengineering decrease the pressure for an agreement on serious mitigation? Sure it could. But you have to ask yourself if you believe the science.

If you do believe the science, and understand that as we approach 2C our civilization and most of the species we share the earth with are in mortal danger, then while that perverse incentive matters, it can't be paramount, any more than the fear that people will eat too much and not exercise is a reason to not put a heart attack survivor on blood pressure and cholesterol-lowering medications. Yes, they have side effects. Yes, they are in some respects an artificial compensation for a failure in self-control. Nevertheless, letting the patient drop dead is a bad option. Better to use the artificial support, and continue to campaign for the lifestyle changes.

xkcd on the election

Randall nails it as usual:

Could we see a triple-dip La Nina?

Lately ENSO has been teasing us with a halting, stop-go flirtation with El Nino conditions. It certainly seems like we're due, given the preceding double-dip La Nina, something which, as I wrote last year, is already an unusual event. But then there's this: 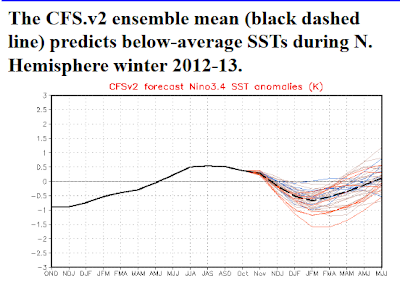 Really? Another La Nina? How weird is that?

Actually it has never happened since NOAA started keeping records. Sixty years ago. Talk about your global weirding.

NOAA still rates a weak El Nino as more likely than a return to La Nina conditions. But it's modestly amazing to me that a triple-dip is even a realistic possibility. Come what may, eventually we're going to see a strong El Nino again. The longer we wait, the more profound and record-shattering the ensuing temperatures are likely to be.
Posted by TheTracker at 12:56 PM 4 comments: