Depressing graph of the day

We will at some point need to talk about the old mayonnaise in new bottle that is "ecomodernism." For today, a pie chart from the IEA that illustrates what is happening in the world while we are distracted by nonsense:

GISTEMP updated pretty early this month, it seems. March was very hot; 3rd hottest on record (+0.84C). That should mean another "hottest 12 months" is in the offing.
Posted by TheTracker at 5:34 AM No comments:

Desalinization and the fragile society

California is looking towards desalinization to address its water shortage:

Now, for the first time, a major California metropolis is on the verge of turning the Pacific Ocean into an everyday source of drinking water. A $1 billion desalination plant to supply booming San Diego County is under construction here and due to open as early as November, providing a major test of whether California cities will be able to resort to the ocean to solve their water woes.

This is part of a larger trend:

Across the Sun Belt, a technology once dismissed as too expensive and harmful to the environment is getting a second look. Texas, facing persistent dry conditions and a population influx, may build several ocean desalination plants. Florida has one operating already and may be forced to build others as a rising sea invades the state’s freshwater supplies.
In California, small ocean desalination plants are up and running in a handful of towns. Plans are far along for a large plant in Huntington Beach that would supply water to populous Orange County. A mothballed plant in Santa Barbara may soon be reactivated. And more than a dozen communities along the California coast are studying the issue.

This trend shouldn't be viewed in isolation, but rather as part of a broad suite of high-tech, high-capital, energy intensive solutions -- or "solutions" -- to environmental problems created or (more often) intensified by population growth and climate change.

Other examples include the vertical farming movement (a more recent write-up is here) and the increasing reliance of sky resorts on snow machines. Global consumption of air conditioning is rising rapidly and the latent demand for it is already vast.

The result of these trends is apt to be a global society that is more comfortable, and more insulated from temporary shifts in weather. These are, of course, good things in and of themselves. They illustrate that there are (as few doubted there were) technological fixes that allow us to adapt (to some extent) to a warmer world.

But while a society that is increasingly dependent on such devices is in the short term more robust, it is in the longer term more fragile. The more you rely on energy-intensive, technologically sophisticated "solutions" to maintain reliable supplies of things as basic to human survival as food and water, the more vulnerable said society is to disruptions that may compromise those work-arounds.

While a society with desalinized drinking water is more resistant to drought, it is only so as long as the power in on, and the engineers come to work, and the spare parts are in supply. Lose that, whether to extreme weather, or war, or terrorism, or some other disruptive force -- and in addition to your other problems you will be very thirsty, very quickly.

We already live in a technological society, of course. I'm under no illusions that we would be able to feed seven billion people without the factories that produce fertilizer or the trucks and ships which move those fertilizers to the farm or the food to the market. Technological dependence exists along a spectrum. Things like desalinization move us further along that spectrum [1]. So while we store up more climate stresses for the society of nine billion people who will be confronting them at mid-century, we are also bequeathing to them an infrastructure which will be more vulnerable to catastrophic collapse -- a tall tower built taller even as the winds begin to howl.

-----------------------------------------
1. This is especially concerning when we push ourselves down that spectrum for no good reason, and desalinization in California is a perfect example of this. In California, as in most other places, the lion's share of the water -- more than three-quarters of it -- is used by agriculture. But when Gov Jerry Brown announced his emergency plan to save water across the state, he asked virtually nothing from the agriculture sector:

Among them: He ordered a 25% reduction in urban use statewide compared to 2013 levels. The directive also bans the use of drinking water to irrigate median strips in public roads, initiates the removal of 1,150 football fields worth of grass to be replaced with drought-tolerant plants; and orders golf courses, campuses and cemeteries to significantly cut their water consumption.
Agricultural mandates were fewer and milder. Irrigation districts were directed to develop drought management plans that include supply and demand data. Agencies in basins where groundwater has been overpumped must immediately monitor groundwater levels.

Ignoring three-quarters of the consumption during a period of unprecedented drought is obviously a political decision, not a practical one. In this context, the valuable technological asset of desalinization is not being put to use to adapt to climate change so much as to adapt to political cowardice and a feckless electorate.

Posted by TheTracker at 8:01 AM No comments: 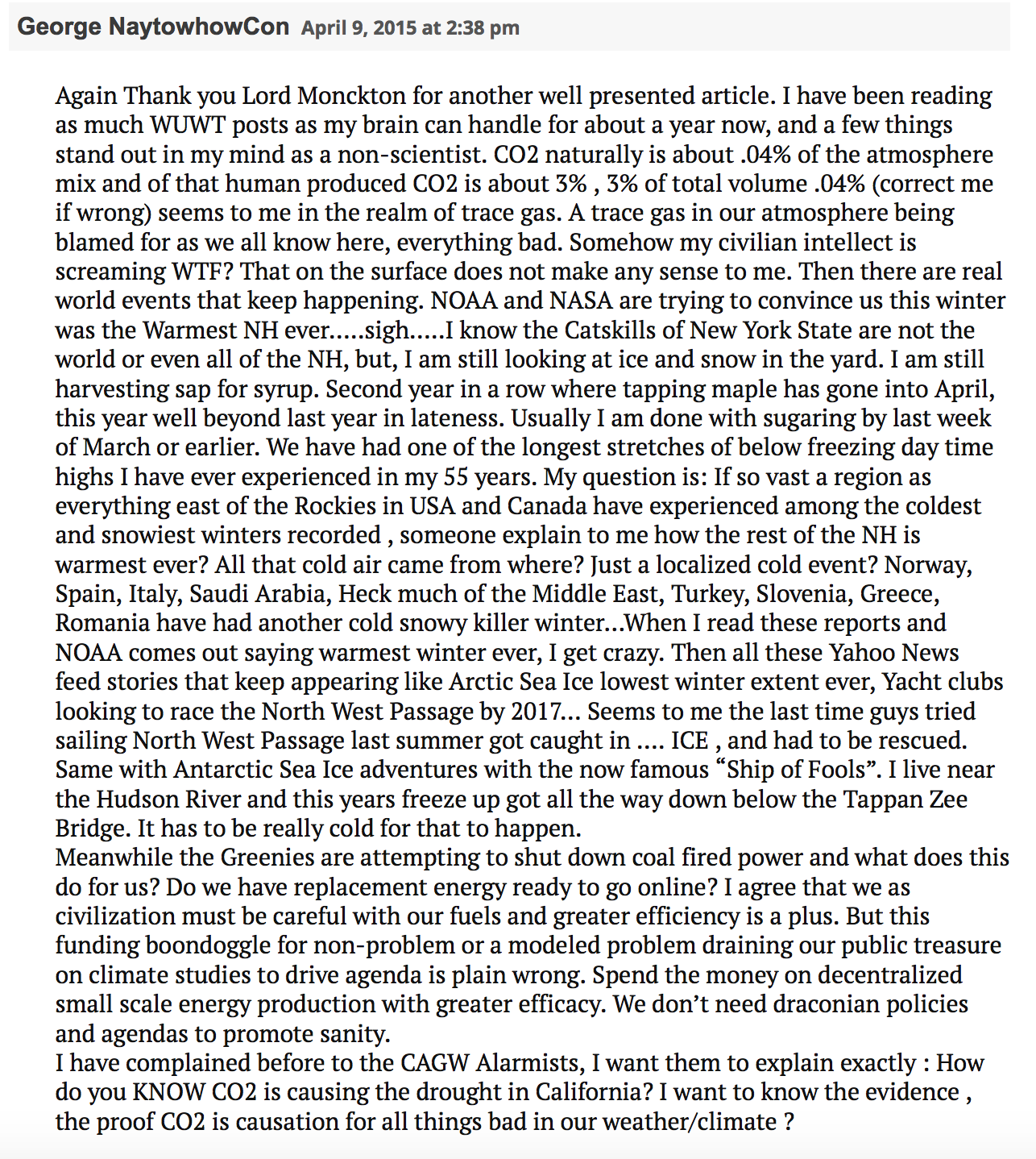 So, let's talk about what went wrong here. First question: what is it about the mentally ill that makes them adverse to paragraph breaks? Really, I sincerely wonder this. Lots of great writers and artists in general have been pretty nutty, yet skilled at their craft. But if you wander into the dark corners of the internet where aliens built the pyramids, vaccines cause autism, or "the Greenies" cooked up the global warming scare, you get headache-inducing rambling like this, the written equivalent of pressured speech. At a certain point horror gives way to pity, and I just wish I could help.

The CO2 numbers are wrong in predictable and boring way, debunked by better men than I here and here. But I do find this interesting: "CO2 naturally is . . . ."

Essentialism is, of course, not a scientific concept. It's interesting to me that for all their hostility to "greenies," many deniers partake in this idea of a natural world with a fixed set of characteristics which is set apart from humans and our influence. This set of assumptions clashes with many other parts of their Weltanschauung, but it creeps in over and over.


A trace gas in our atmosphere being blamed for as we all know here, everything bad. Somehow my civilian intellect is screaming WTF? That on the surface does not make any sense to me.

The denier has a high regard for his own intuition, which he confuses with rational thought. They form a false idea of the subject which emerges from their lack of understanding of the physical world and is animated by paranoia. The reminder of their process of deduction will involve seeking out confirmatory evidence and ideas and shunning other facts and arguments as the pleas of the condemned.


I have complained before to the CAGW Alarmists, I want them to explain exactly

Like a particularly obnoxious child, the denier firmly believes that other people owe him "exact" answers to any question he might be able to formulate, and that a free education is his right. Meanwhile, with ignorance his holy shield, he will beat off any effort to actually help him bring his thoughts in line with reality.


When I read these reports and NOAA comes out saying warmest winter ever, I get crazy.

Judith Curry fails at another profession

Judith Curry has the guts to ask the big question: 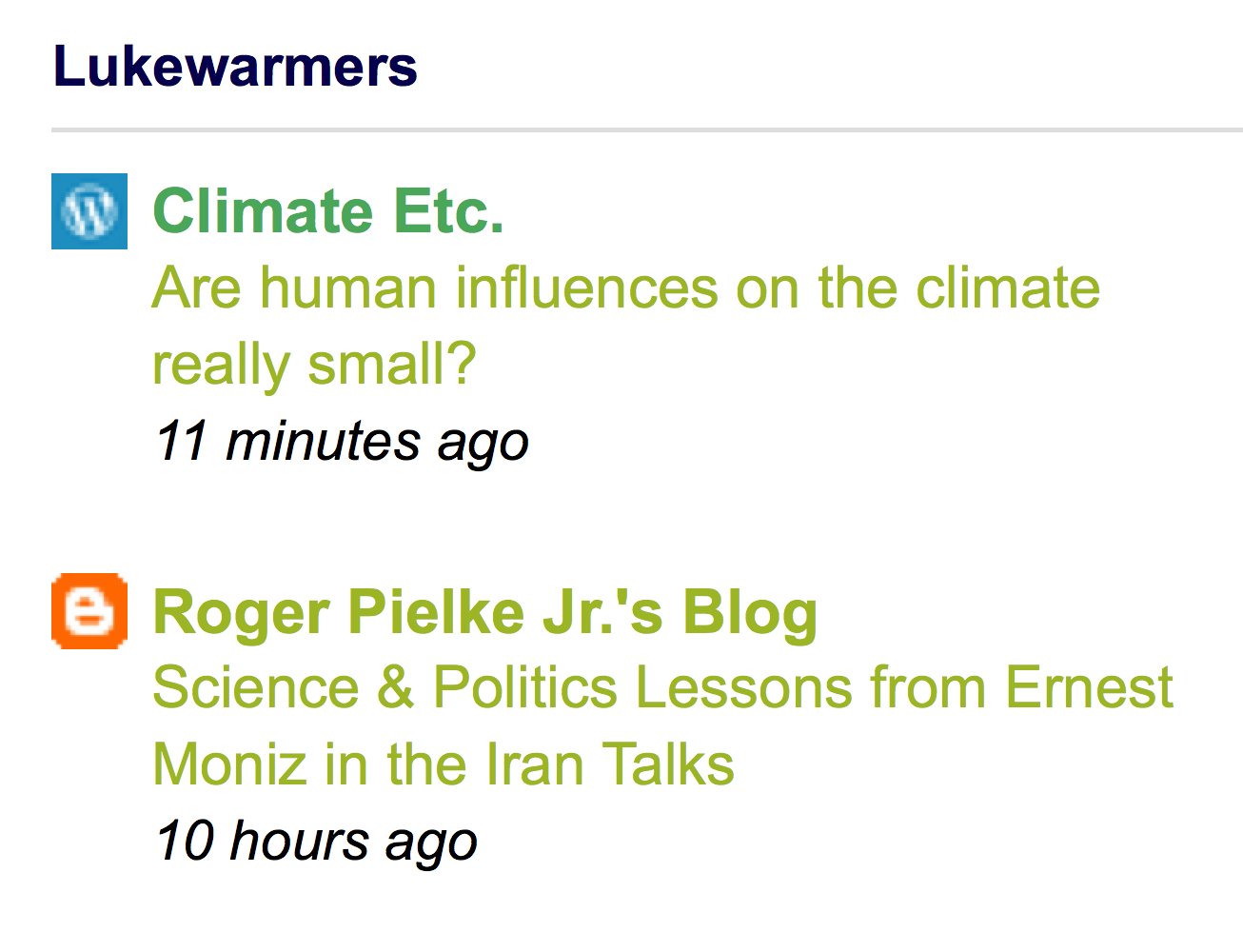 Which is a good example of the following principle:

Email ThisBlogThis!Share to TwitterShare to FacebookShare to Pinterest
Labels: Are you retarded?, denialism, deniers, Judith Curry

This Nino started out anemic and is still, as yet, pretty weak sauce, with a Tmax of +0.7C. For a while it looked as though it might fade out before qualifying as an El Nino (which requires 5 months at or above +0.5C) or might just hit that mark before fading away. And indeed, +0.7C was last seen two months ago and we are presenting clinging to the lower bound of El Nino (+0.5C for the first 3 months of this year.)

But the thing is perking up. This week we're back to +0.7C for the weekly numbers, and the forecasters seem to be coming around to the notion that the event will continue to strengthen:

If the El Nino does strengthen in this way, obviously 2015 could very well break the record set by 2014. And if it is still strong going into 2016, the first part of that year may be very hot as well.
Posted by TheTracker at 5:30 AM No comments: