Minor myths: Do some economists think global warming will be beneficial?


Several times recently, I've read or had it put to me that we don't know if global warming is going to be harmful or costly, and, specifically, that some economists think it may produce a net benefit.

To investigate this claim, I went to Google Scholar with the search terms "cost climate change." I ignored any article that wasn't about the cost of climate change, and also ignored any article not either written by a trained economist or published in their literature. I took only articles from 2009 onwards, picking up where this interesting study left off (Tol looks at 211 estimates of the cost of climate change, finding eight negative estimates (out of 211) from the work of just three authors, including Tol himself. He concludes -- and, as background, he is unquestionably the most respected and accomplished of the "skeptical" economists -- "Firstly, greenhouse gas emission reduction today is justified. Even the most conservative assumption lead to positive estimates of the social cost of carbon (cf. Table 1) and the Pigou tax is thus greater than zero.")

So onwards towards the present:
1. I quickly found out Martin L. Weitzman is not sanguine:


It is difficult to imagine what +10C–20°C might mean for life on Earth, but such high temperatures have not been seen for hundreds of millions of years and such a rate of change over a few centuries would be unprecedented even on a timescale of billions of years. Global average warming of 10°C–20°C masks tremendous local and seasonal variation, which can be expected to produce temperature increases greater than this at particular times in particular places. Because these hypothetical temperature changes would be geologically instantaneous, they would effectively destroy planet Earth as we know it. At a mini- mum such temperatures would trigger mass species extinctions and biosphere ecosystem disintegration matching or exceeding the immense planetary die-offs associated in Earth’s history with a handful of previous geoenvironmental mega-catastrophes. There exist some truly terrifying consequences of mean temperature increases +10°C–20°C, such as disintegration of Greenland’s and at least the western part of the Antarctic’s ice sheets with dramatic raising of sea level by perhaps thirty meters or so, critically important changes in ocean heat transport systems associated with thermohaline circulations, complete disruption of weather, moisture and precipitation patterns at every planetary scale, highly consequential geographic changes in freshwater availability, and regional desertification.

All of the above-mentioned horrifying examples of climate- change mega-disasters are incontrovertibly possible on a timescale of centuries.

Geez, Martin, thanks for the pep talk.

2. Burniaux et al, writing for the OCED, are less terrified but equally convinced:


The benefits of mitigation policies are difficult to quantify and fully monetise. Nevertheless, OECD analysis finds that when non-market impacts and risks of inaction are factored in, ambitious mitigation action is found to be economically rational – i.e. to result in net benefits – at the global level. This is the case even though the analysis does not factor in the co-benefits from mitigation action (e.g. in terms of human health, energy security or biodiversity), which previous OECD analysis estimated to be large (Burniaux et al. 2008).

3. I found Richard Tol had done another meta-analysis:

4. Bollen et al revisit a longtime hobbyhorse of IT, the additional benefits to human health and welfare of cutting fossil fuel burning, a major cause of asthma, lung cancer and other respiratory diseases. They think the air pollution benefits may be the larger benefit! But, again, there's no suggestion than global warming isn't a significantly costly event:


We attempt to cover at least part of the existing gap in the literature by assessing how costs and benefits of technologies and strategies that jointly tackle these two environmental problems can best be balanced. By using specific technological options that cut down local air pollution, e.g. related to particulate emissions, one may concurrently reduce CO2 emissions and thus contribute to diminishing global climate change. Inversely, some of the long-term climate change strategies simultaneously improve the quality of air in the short run. We have extended the well-established MERGE model by including emissions of particulate matter, and show that integrated environmental policies generate net global welfare benefits. We also demonstrate that the discounted benefits of local air pollution reduction significantly outweigh those of global climate change mitigation, at least by a factor of 2, but in most cases of our sensitivity analysis much more. Still, we do not argue to only restrict energy policy today to what should be our first priority, local air pollution control, and wait with the reduction of greenhouse gas emissions. Instead, we propose to design policies that simultaneously address these issues, as their combination creates an additional climate change bonus. As such, climate change mitigation proves an ancillary benefit of air pollution reduction, rather than the other way around.

5. Hill et al, who are primarily concerned with analyzing the utility of biofuels, cleverly use estimates of the cost of CCS (carbon capture and storage) to set an upper limit on carbon costs:


We generate a monetary cost for GHG emissions based on independent estimates of carbon mitigation costs, carbon market prices, and the social cost of carbon. Carbon mitigation (capture and storage) costs for an integrated gasification combined-cycle electricity generating plant are $92–$147 Mg−1 C (18); we use the midpoint of this range, $120 Mg−1 C. This estimate is in the range of recent prices on the European carbon market [€23–28 Mg−1 CO2, or U.S. $133–$162 Mg−1 C at an exchange rate of $1.58 €−1 in July 2008, and €18–23 Mg−1 CO2, or U.S. $88–$112 Mg−1 C at an exchange rate of $1.33 €−1 in October 2008] (molecular weight ratio of CO2:C = 44:12). It is also within the range of estimates for the “social cost of carbon,” which represents the expected future damages from enhanced climate change (e.g., damages from sea level rise, increased storm intensity, and crop losses from more intensive drought). The mean estimate of the social cost of carbon from peer-reviewed studies was $43 Mg−1 C (19), although there was large variation in the estimates from below $0 to >$300 Mg−1 C. The large variation in estimates occurs largely because of disagreement on how to weigh future costs and benefits relative to the present (“discounting”) and how to weigh costs and benefits accruing to poor and rich countries (“equity weights”). In addition, there are large uncertainties about climate forcing impacts and future human adaptability.

6. Anthoff, Hepburn, and Tol (him again!) find that equity-weighting increases the estimated damages of climate change. What is equity weighting? I have no idea (the downside of wading through the economists' literature). My usual approach is useless -- there's no Wikipedia page. At any rate, they use a damages estimate that is positive, based on Tol's earlier work.


The integrated assessment models (IAMs) that economists use to analyze the expected costs and benefits of climate policies frequently suggest that the “optimal” policy is to go slowly and to do relatively little in the near term to reduce greenhouse gas emissions. We trace this finding to the contestable assumptions and limitations of IAMs. . . . A better approach to climate policy, drawing on recent research on the economics of uncertainty, would reframe the problem as buying insurance against catastrophic, low-probability events. Policy decisions should be based on a judgment concerning the maximum tolerable increase in temperature and/or carbon dioxide levels given the state of scientific understanding. The appropriate role for economists would then be to determine the least-cost global strategy to achieve that target. While this remains a demanding and complex problem, it is far more tractable and epistemically defensible than the cost-benefit comparisons attempted by most IAMs.

8. Anthoff and Tol are back, "Discounting for Climate Change":


. . . However, if we probabilistically constrain the parameters to values that are implied by observed behaviour, we find that the expected social cost of carbon, corrected for uncertainty and inequity, is approximate 60 US dollar per metric tonne of carbon (or roughly $17 per tonne of CO2) under the assumption that catastrophic risk is zero.

. . . the problem with that being that catastrophic risk isn't zero. In any case, again the cost is positive.

9.Heltberg et al don't give us a number, but they don't give any hint they think climate change will be of net benefit in "Addressing human vulnerability to climate change: Toward a ‘no-regrets’ approach":

Recent evidence and predictions indicate that climate changes are accelerating and will lead to wide-ranging shifts in climate variables. There will be changes in the mean and variance of rainfall and temperature, extreme weather events, food and agriculture production and prices, water availability and access, nutrition and health status. The most adverse impacts are predicted in the developing world because of geographic exposure, reliance on climate sensitive sectors, low incomes, and weak adaptive capacity. Socio-economic impacts, though generally not well- understood, are likely to be profound and will impact humans through a variety of direct and indirect pathways (IPCC, 2007; Cline, 2007; Stern, 2007). The indirect risks are often hard to predict (they are the consequences of consequences) but could have the worst impacts.

10. Jamet and Corfee-Morlot (love those French names) round out our top ten with a nice review: "Assessing the Impacts of Climate Change":

On the whole, estimates of the global impact of climate change have not changed much over the last 10 years according to the IPCC (Figure 3). However, the Stern review estimates are much larger than in other studies. As already mentioned, this is mainly due to a low discount rate, and to a lesser extent to new information regarding the impacts (Nordhaus, 2007a; Dasgupta, 2007). Nevertheless, use of a low discount rate may involuntarily yield more plausible estimates than those in the rest of the literature (Weitzman, 2007). This is in part because there are large uncertainties on the impacts of climate change, which are explained in more detail in the following section. 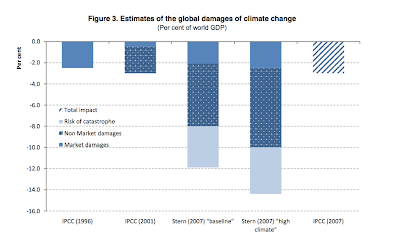 So what have we learned from this exercise? For my part I am reminded again that it is much easier to be a liar than to defend the truth. It's easy for a denier to causally toss off the assertion that some economists think climate change will be of net benefit. Maybe they are thinking of Lomborg (who supports a carbon tax, and anyhow is not actually an economist) or Tol (who is also on record supporting a carbon tax.) Maybe they are just repeating something they've heard; maybe they think it sounds plausible and no one is likely to check. But in any case the misinformation is the work of a moment; fact-checking it takes weary hours.

At any rate: economists more or less universally believe that the impact of global warming will be a net negative. They differ as to the magnitude of the damages expected, but for the most part they are in broad agreement with the climate scientists that global warming on a business as usual pathway will be expensive and destructive in the best case and utterly catastrophic at the worst.

Posted by TheTracker at 1:18 PM