Chart from the Wikipedia

So a few interesting things here that we maybe all know, but are worth reviewing. Fossil fuels are dominating the energy mix in every sense. They are the largest component of the energy mix, and they are growing the fastest. We would need between five and six times the amount of low-carbon energy currently in existence to phase out fossil fuels, assuming demand remained static. And demand is not going to remain static.

And the excuse that this is mostly hydropower, and hydropower can't be scaled up, won't wash here, because we can see renewable energy as a category is rapidly growing -- if only the hydro resources matter, where is the growth coming from?

When I look at the share of fossil fuels, though, and the tiny shares of its rivals, I'm reminded of how guerrila organizations like the IRA or Fatah and Hamas, faced with an overwhelmingly powerful and dominant force, turn on each other and their own people in sheer frustration, fighting over turf like rival gangs, murdering informants, acting like criminals.

It's stupid and self-destructive, but sometimes when you're tired of losing you ache for a fight you can win. For environmentalists, nuclear is an easy target, because it's unpopular, expensive, and people are just plain afraid of it. All things we wish could be said about fossil fuels. The environmental movement, aided by public mistrust and fear and lack of corporate investment, are within striking distance of shutting down an entire industry. It's just that it's the wrong one.

What the hippie-punching nuke-boosters want is a little more complex. I don't think it's really about the climate for them. They want to fight the cultural wars, bash greens, promote big and manly and heterosexual things -- but they are smart enough not to go down the road of denying the science.

And the beauty of it is, they don't have to! By lining up with James Hansen and other smart greens behind a policy of more clean nuclear energy, they have found the one part of the argument between environmentalists and conservatives that they can actually win. For once they have (a part of the) real solutions, and the other side is sticking their heads in the sand. 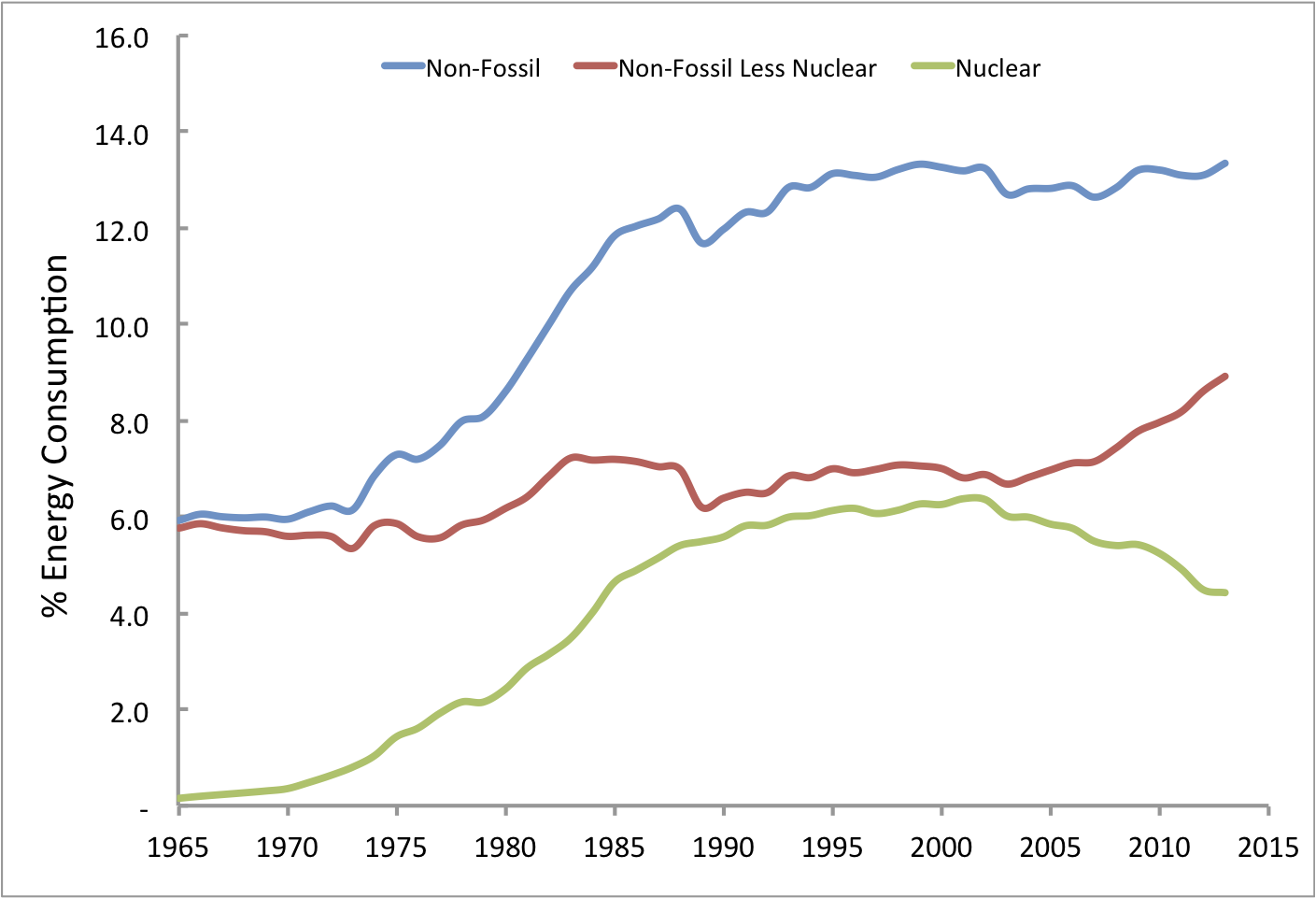 H/t blueshift, via the Rabett, from BP.

What this chart adds to our understanding is that, as far as the last decade is concerned, anti-nuclear environmentalists are winning the aforementioned pointless catfight. And what they have won is a total stagnation in the proportional of non-fossil-fuel energy. And make no mistake, the blue line is what history will judge us on.
Posted by TheTracker at 10:45 PM