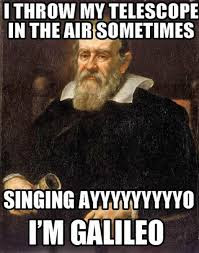 The Galileo gambit, or Galileo fallacy, is the notion that if you are vilified for your ideas, you must be right. It refers to Galileo Galilei's famous persecution at the hands of the Roman Catholic Church for his defence of heliocentrism in the face of the orthodox Biblical literalism of the day. People use this argument repeatedly in response to serious criticisms that more often than not they just don't understand.

Amen. And there are a few other salient points about the example of Galileo we ought bear in mind. Galileo was a scientific producer, not primarily a critic (although he could write a mean polemic when he had a mind, but little of that work has stood the test of time). He designed his own instruments, and with those instruments he made observations, and it was in explaining those observations that he came into conflict with the church.

This is the case with most of the iconoclastic scientists to whom we are invited to compare Monckton, Soon, Spencer et al: Galileo and Darwin and Newton and Einstein and so on. "Skeptics" cite them because they challenged the consensus. They pay less attention to the fact that they did so by providing compelling explanations for observed facts, not by ridiculing the existing theories as failures. 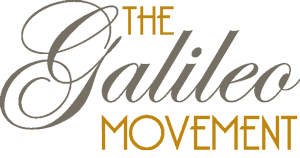 This is not the case with most deniers. Compare the goals of "The Galileo Movement," an anti-climate-science outfit, on their website:

Start following the money yourself. Begin replacing climate guilt and fear with reassurance, peace and security.

Why pay dearly for nothing? Discover how to protect the environment by maintaining economic security, choices and freedom - while saving money.

Discover for yourself peace, fairness, ease and trust by really caring for the environment.

Although he seriously considered the priesthood as a young man, he enrolled for a medical degree at the University of Pisa at his father's urging. He did not complete this degree, but instead studied mathematics.[16]

Galileo was also studious of disegno, a term encompassing fine art, and in 1588 attained an instructor position in the Accademia delle Arti del Disegno in Florence, teaching perspective and chiaroscuro. Being inspired by the artistic tradition of the city and the works of the Renaissance artists, Galileo acquired an aesthetic mentality. While a young teacher at the Accademia, he began a lifelong friendship with the Florentine painter Cigoli, who included Galileo's lunar observations in one of his paintings.[17][18]

In 1589, he was appointed to the chair of mathematics in Pisa. In 1591 his father died and he was entrusted with the care of his younger brother Michelagnolo. In 1592, he moved to the University of Padua, teaching geometry, mechanics, and astronomy until 1610.[19] During this period Galileo made significant discoveries in both pure fundamental science (for example, kinematics of motion and astronomy) as well as practical applied science (for example, strength of materials and improvement of the telescope). His multiple interests included the study of astrology, which at the time was a discipline tied to the studies of mathematics and astronomy.

By the time of the heliocentrism controversy that brought Galileo into conflict with the church, in 1616, he had been teaching at university for twenty-eight years. He was an expert in multiple fields and he made substantial contributions to physics, astronomy, mathematics, materials engineering and optics. He was not the equivalent of a skeptic blogger whose scientific education consists of daily visits to WUWT. He was not a self-taught auteur. He was a widely acknowledged genius that had been churning out original scientific work for several decades.

Nor was Galileo always right. Forget trusting people because they are like Galileo, if you took the side of the actual, literal Galileo against his contemporaries you'd spend a lot of time being wrong.

* Galileo thought the Sun caused the tides (in deference to any "skeptics" visiting: it's the moon).
* Galileo thought planetary orbits were perfectly circular; he rejected Kepler's (correct) theory of elliptical orbits.
* Galileo denied that comets were physical objects, arguing that they were mere reflections or optical illusions, like a rainbow.

If even actually being Galileo doesn't make you right, then comparing yourself to the great scientist is not going to cut the mustard.

Posted by TheTracker at 7:24 AM

Email ThisBlogThis!Share to TwitterShare to FacebookShare to Pinterest
Labels: denialism, deniers, minor myths, you are not Galileo