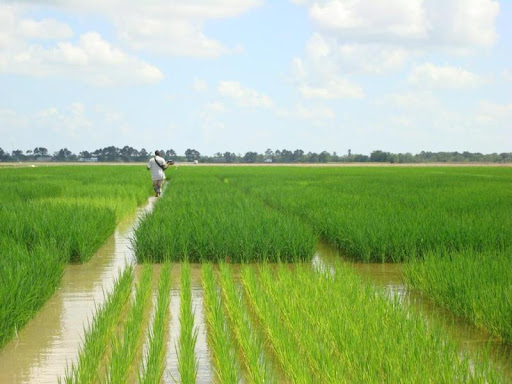 Climate change, the monsoon, and rice yield in India – Auffhammer et al. (2011) “Recent research indicates that monsoon rainfall became less frequent but more intense in India during the latter half of the Twentieth Century, thus increasing the risk of drought and flood damage to the country’s wet-season (kharif) rice crop. Our statistical analysis of state-level Indian data confirms that drought and extreme rainfall negatively affected rice yield (harvest per hectare) in predominantly rainfed areas during 1966–2002, with drought having a much greater impact than extreme rainfall. Using Monte Carlo simulation, we find that yield would have been 1.7% higher on average if monsoon characteristics, especially drought frequency, had not changed since 1960. Yield would have received an additional boost of nearly 4% if two other meteorological changes (warmer nights and lower rainfall at the end of the growing season) had not occurred. In combination, these changes would have increased cumulative harvest during 1966–2002 by an amount equivalent to about a fifth of the increase caused by improvements in farming technology. Climate change has evidently already negatively affected India’s hundreds of millions of rice producers and consumers.” Maximilian Auffhammer, V. Ramanathan and Jeffrey R. Vincent, Climatic Change, DOI: 10.1007/s10584-011-0208-4.

If you have come to hear my short-term price outlook, well here it is: The loss since June of large portions of world wheat and coarse grain production has left us with much higher and more volatile prices for alternatives for farmers to plant in the next year. Even rice may be affected in some areas at the margin by the high prices of corn, wheat and soybeans in particular. Rice as well has suffered some losses in India, Indonesia, Pakistan, China, Cambodia and Thailand as well as in the Western Hemisphere, last year in South America, this year in the United States due to record setting night time temperatures. We may have lost upwards of half a million MT of US paddy rice versus the September estimate from the US Department of Agriculture.

Increased nighttime warming relative to the average temperature is, of course, one of the telltale features of anthropogenic warming and will be an increasing problem in the years to come.

Hamilton also note the uniquely thirsty nature of rice as a crop:

Water is a particularly difficult issue for all countries with large populations and low levels of ground water per capita. In particular, because rice takes two or three times as much ground water as other rain fed crops, the cost of water can lead to radical changes in how and where rice is grown. A good example is Egypt that is trying to face in to a future where its major River the Nile is projected to stop flowing into the sea within a decade. Notice that Egyptian experts estimate that it takes about six billion cubic meters of water to grow one million acres of Egyptian rice. If folks start charging for water, the price of rice could go to very high levels.

The loss of reliable glacier runoff, worsening droughts, and the salinization of the water table that can be expected with rising seas will all exacerbate a problem of water scarcity created by overpopulation, subsidy and waste.

The long-term outlook for rice is grim:

South Asia is home to nearly 22% of the world’s population, including 40% of the world’s poor. Agriculture plays a critical role in terms of employment and livelihood security for a large majority of people in all countries of the region. The region is prone to climatic extremes, which regularly impact agricultural production and farmers’ livelihood. Himalayan glaciers, a major source of water for the rivers in the Indo-Gangetic plains, are projected to significantly recede in future that could affect food and livelihood security of millions of people in Pakistan, Nepal, Bhutan, India and Bangladesh. Climate change is further projected to cause a 10–40% loss in crop production in the region by the end of the century.

Accompanied by a 50% increase in population. Remember the number -- 14.5 trillion calories a day. It's non-negotiable. And it's under threat.
Posted by TheTracker at 4:06 PM