The lesser Pielke has a new post reiterating his dislike of of the "climate wedge" analysis, which says, somewhat incontestably one might presume, that stablizing greenhouse gas emissions will require a number of different tactics, which some people like to group together in terms of "wedges" of reduced emissions.

It takes a while for Pielke to get to the point of what he has against wedges, but he does give us this sweet graphic: 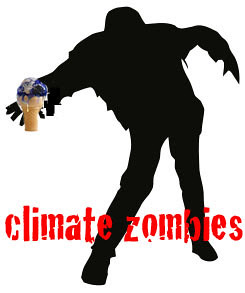 Apparently if you disagree with Pielke after he has already said you are wrong, you are a zombie. With ice cream. So what is the wedge analysts' terrible mistake?


The focus on deployment, often to derision if not the exclusion of the need for innovation, is still central to environmental messaging, even as the math of emissions reductions would seem obvious and the policy centerpiece of DTW -- cap-and-trade -- has failed comprehensively.

I'm sorry, what? Environmentalists don't like innovation? That's ridiculous. Environmentalists, like the rest of the public, love the idea of green tech, love to highlight the next newest best solar panel/wind turbine/tidal energy station. And what does that have to do with climate wedges?

One might think that the modern environmental movement is adept enough at simple math to accept this message and thus proceed to advocate policies consistent with our lack of technological capabilities, such as calling for a much greater commitment to innovation. While some have, of course, the loudest, most well funded and arguably most influential parts of the movement have strenuously resisted the notion that we do not have the technology needed to rapidly decarbonize our economy, preferring to hold on to the myth that -- in the words of the original "wedges" paper -- "Humanity can solve the carbon and climate problem in the first half of this century simply by scaling up what we already know how to do."

So what Pielke is really mad about is the notion that we can start to decarbonize now, today, as opposed to his preferred approach -- waiting and waiting on a magical technological fix whose sheer low-cost high-yield awesomeness will cause it to literally vanish from the Popular Mechanics cover struggling to contain it and materialize in the world.

The climate "wedge" approach gets caught in the crossfire here for no other reason than the fact that by breaking the problem into eight or ten or twenty "wedges," you pre-refute the common "skeptic" counterargument that "Well, that won't be enough [by itself] to solve the problem." Wedge analysis highlights what we can do today by combining the tools and technology we have rather than waiting for a single technological "silver bullet" (which, if we find one at some point, will be a more than welcome development.)

What makes Pielke just furious is the notion that we have the tools to start solving this problem right now, if we chose to use them. That if France get 75% of its energy from nuclear power, nuclear power could provide more of the world's energy. That if Japan gets twice as much economic output from a unit of energy as the US, that a Japan-like commitment to energy efficiency could cut emissions. That solar and wind power costs are falling and while not "competitive" with coal or natural gas, are already cheap enough for widespread deployment without bankrupting ourselves. And so on.

The beauty of a carbon tax is that you never have to chose between a dollar for research and innovation and a dollar to implement the solution you already have. You price the negative externality of carbon correctly, and you let the market make that call. Regardless, Pielke is not being honest with himself here. When he says he has a problem with greens' attitude towards new technology, real issue is their rejection of his rationalization for procrastination -- some day the technology will save us, but not yet, Lord, not yet.

A little Philip Larkin for your Tuesday, Dr. Pielke:

Posted by TheTracker at 6:36 AM