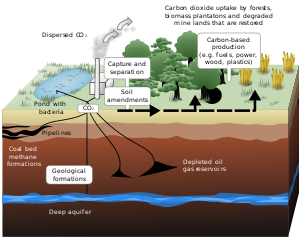 An interesting article on carbon sequestration is flagged by Watts. Money quote:

When forest harvest levels fell 82 percent on public forest lands in the years after passage of this act, they became a significant carbon “sink” for the first time in decades, absorbing much more carbon from the atmosphere than they released. At the same time, private forest lands became close to carbon neutral.

Carbon emission or sequestration is a key factor in global warming, and a concept now gaining wider interest is the role of forest lands in helping to address concerns about the greenhouse effect.

When they talk about sequestration "gaining wider interest" it is allusion to some science I have been meaning to blog on for some time, namely, that the importance of plant sequestration is larger than once thought, and has been growing with the help of carbon fertilization, whereas the absorption of carbon dioxide by the oceans, which had received more attention up to this point, is not as dominant a player as once thought, and may be showing signs of fatigue.

Since that post requires an overview of the carbon cycle, carbon fertilization, oceanic circulation and ocean acidification, as well as natural and man-made carbon sequestration, it's going to have to wait a little longer. The bottom line? The original "carbon capture and storage" -- growing plants and leaving them in the ground -- has great potential for reducing net greenhouse gas emissions, but continued warming and the problem of deforestation puts this sink in question.
Posted by TheTracker at 3:15 AM