Watts hugs Monckton -- by lying through his teeth. 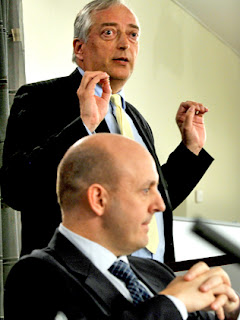 Having been forced, in a humiliating climb-down, to admit that his hesitant foray into peer-reviewed research confirmed, rather than casting doubt on, global warming, Anthony Watts is back to his wheelhouse: dubious assertions and outright lies, spread widely by credulous followers.

It's times like this we miss Ben, whose heroic effort to catalog the logorrheic distortions of WUWT have led, understandably, to many long hiatuses from blogging:

Love him or hate him, the man can win a debate. Andrew Bolt shares the results of the National Press Club Debate in Australia writing:

No wonder the warmists hate debate

Wow, sounds impressive. But I have a few questions. Who is voting? Who counted the votes? Why do all the references to Monckton "winning" this debate lead back to Bolt or Watts himself? Truth or fiction?

If you follow the link Watts provides, it leads to a post by the infamously inaccurate Andrew Bolt. Watts has thoughtfully reposted Bolt's entire post, except for the part that identifies the source of Bolt's information:

(Thanks to reader Adam.)

Yes, thank you "Adam." Now the picture is clearer. Somebody sent Andrew Bolt a claim that Monckton won the debate. The national press club hosts debates, but just like an American presidential debate, the host does not declare a winner. So "Adam" either polled random pseudoskeptics, or he just made numbers up. He passes it on to Andrew Bolt, who reports it as truth. Anthony Watts spreads the fiction, now concealing the dodgy unverifiable source. And the ultimate result is this: "monckton wins" and "national press club" gets you 3,550 hits on Google, including:

These links are almost entirely* reposts of the same misleading assertions by Bolt as repeated and amplified by Watts. Yet one can see how these assertions, presented to "skeptics" on denier websites, play into an established narrative and are not likely to be questioned on examined critically, especially when they have passed through several sets of hands already. What we are seeing today is that with the help of gullible partisans, a lie can pass from rumor to a partisan conventional wisdom in a matter of hours, The internet has given new bite to the old saying that "A lie can travel halfway around the world while the truth is still putting on its boots."


* I did find one actual poll of 218 Australians who watched the debate. They found 49% thought Monckton won, 37% thought Denniss won, and the reminder were unsure. This is a far cry from the 91% - 9% claimed by Watts and Bolt.
Posted by TheTracker at 5:55 PM