Out of the safe zone 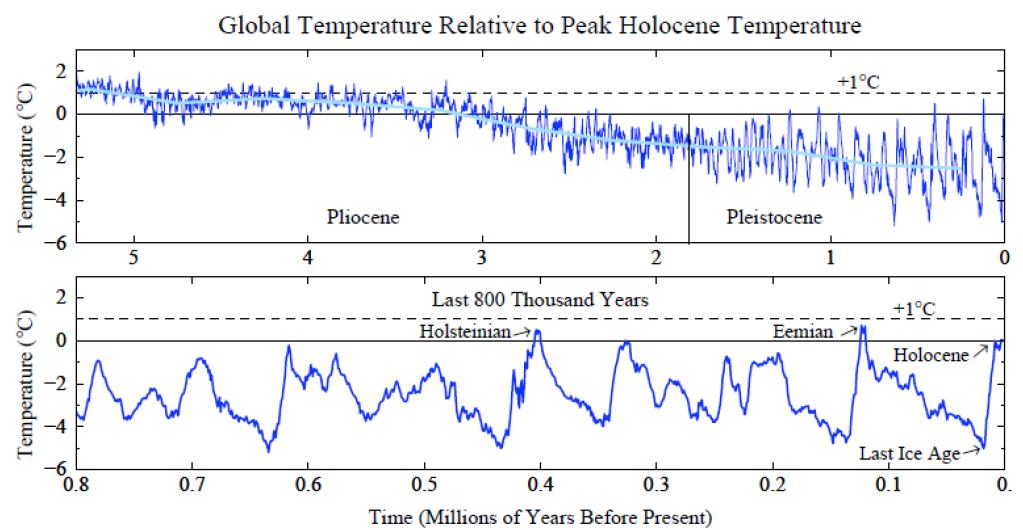 The image above is from "Paleoclimate Implications for Human-Made Climate Change" (Hansen and Sato, 2011). It expresses an important reality about climate change: the stated goal of world governments, affirmed at Kyoto and at Copenhagen, of avoiding dangerous anthropomorphic interference in the climate, will not be achieved. In the next fifty years, let alone the next hundred, the world will be warmer than it has been for millions of years. The pace of these changes will outstrip the evolutionary response of animals and plants to warmer temperatures. They will take the world far outside the range of climate which has been experienced by people in the entire history of settled human life.

That is obviously dangerous. And we cannot stop it; not with emissions cuts, not even with geoengineering, which would take many years to get up and running. So what is the decision we are faced with?

It's how fast and how far into a dangerous unknown we want to go. Do you want to walk into the pitch-black rubbish-strewn basement, or do you want to get a running start and take a flying leap? Do you want to see the doctor about what may be a fatal cancer, or wait six months as it grows and spreads?

"Safe" is no longer on the table. But that doesn't mean we should look at the coming crash and hit the gas pedal. Our generation and many generations after us will be dealing with global warming -- best case, the warming will continue for decades, and the consequences like sea level rise and permafrost melting will continue for centuries. But humans are smart, creative, and have a great capacity to adapt. If we start the adaptation now, perhaps this problem will remain within what I hope will remain a growing capacity (economic, scientific, social) to cope with challenges.

Fail to address it, and there is a potential trap for humanity in our future -- a point at which global warming reduces our total adaptive capacity (through economic damage, loss of people and property, and political disruption) causing our adaptive capacity to diminish as the consequences of warming ramp up.

Hurt us a little, and we pay the bill and go on. This is what the economic models of warming assume will happen. Hurt us a lot, though, to the point where economies shrink instead of grow, or waste their resources on wars or coping with population disruption -- and the climate problem becomes relatively larger. People's willingness to forgo the short-term for the long-term -- protecting forests, leaving dirty fuels in the ground, improving energy efficiency -- may vanish as societies panic in the face of environmental disruption.
Posted by TheTracker at 3:53 AM

Email ThisBlogThis!Share to TwitterShare to FacebookShare to Pinterest
Labels: adaptation to climate change