Climate Change 2020: Still on a glide-path to disaster, Part One

In the last few years, some climate analysts have underlined the fact -- which was never in doubt, but was arguably under-emphasized -- that RCP 8.5 was designed more as a worst case than as the shortest-odds bet.

As anyone might anticipate who has spent more than five minutes interacting with climate deniers or lukewarmers/inactivists, numerous bad-faith actors took this as their cue to one the one hand exaggerate the importance of RCP 8.5 to the climate literature and on the other to claim it has been admitted to be impossible.

I only wish I were kidding. Eric Roston's screed is representative: 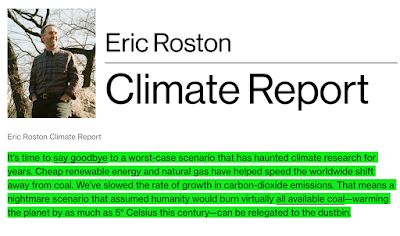 To justify relegating the "nightmare scenario" to the "dustbin," Rosten cites the following Nature editorial:

RCP8.5 was intended to explore an unlikely high-risk future2. But it has been widely used by some experts, policymakers and the media as something else entirely: as a likely ‘business as usual’ outcome. A sizeable portion of the literature on climate impacts refers to RCP8.5 as business as usual, implying that it is probable in the absence of stringent climate mitigation. The media then often amplifies this message, sometimes without communicating the nuances. This results in further confusion regarding probable emissions outcomes, because many climate researchers are not familiar with the details of these scenarios in the energy-modelling literature.

This is particularly problematic when the worst-case scenario is contrasted with the most optimistic one, especially in high-profile scholarly work. This includes studies by the IPCC, such as AR5 and last year’s special report on the impact of climate change on the ocean and cryosphere4. The focus becomes the extremes, rather than the multitude of more likely pathways in between.

Happily — and that’s a word we climatologists rarely get to use — the world imagined in RCP8.5 is one that, in our view, becomes increasingly implausible with every passing year5. Emission pathways to get to RCP8.5 generally require an unprecedented fivefold increase in coal use by the end of the century, an amount larger than some estimates of recoverable coal reserves6. It is thought that global coal use peaked in 2013, and although increases are still possible, many energy forecasts expect it to flatline over the next few decades7. Furthermore, the falling cost of clean energy sources is a trend that is unlikely to reverse, even in the absence of new climate policies7.

The first problem here is that, by definition, implausible is not impossible. And when dealing with "nightmare scenarios," identifying them as implausible is far from making the case we should "say goodbye" to the possibilities.

But the major problem with this thinking, in my view, is that RCP 8.5 is quite plausible, and those who say it isn't -- to say nothing of deniers screaming about "the RCP 8.5 fraud" -- are overreacting to short-term trends and politicians' promises.

The case against RCP8.5, in broad strokes, is this:

*Coal use peaked in 2013, and is likely to continue to decline, making the expansion of coal use posited in RCP8.5 implausible.
*Clean energy options (solar and wind) have dramatically fallen in price, making a return to dirter energy unlikely.
*The amount of coal required to make RCP8.5 a reality may not even exist on earth -- certainly it will not be cost-effective to extract it.
*The pledges by the vast majority of the world's governments in the Paris accords and elsewhere suggest a "business as usual" path far below that of RCP8.5.

Before addressing these points one by one, let's construct a simple model to illustrate why RCP8.5 is still quite plausible.

There are two overwhelming important long-time drivers of GHG emissions: population growth, and economic growth. Both can be captured by a single metric: total (not per capita) global GDP, sometimes called Gross World Product (GWP.)

While it is possible to decouple economic production from GHG emissions, in practice this is a slow, halting, process. Since 1980, carbon intensity (emissions per unit of GDP at purchasing power parity) has fallen slowly, by less than 1.5% per annum: 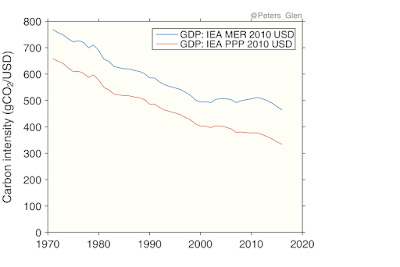 If you start with the current numbers, plug in the growth rate of 2.6%, and look at 2100, you don't get RCP8.5 -- you get something far, far worse. RCP8.5 projects a leveling off of emissions growth and emissions of less than 30GtC of carbon annually, compared to 10GtC today. 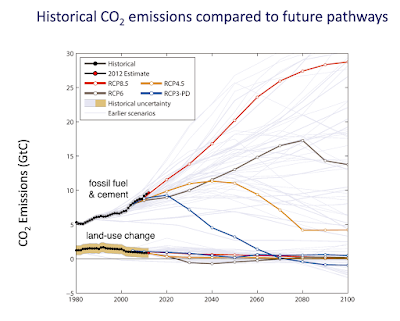 2.6% growth, on the other hand, would see us over 75GtC in 2100 -- more than double RCP8.5. That's without incorporating carbon-cycle feedbacks or assuming any turn for the worse in terms of climate policy. It's just a straight-up extrapolation of current trends. And while I am not a modelling expert, and extrapolating current trends is far from the only way to guess at the shape of the future (and obviously depends heavily on which trends you project forwards) nevertheless, "Things continue as they are" is always a scenario we should give serious consideration to, lest we outsmart ourselves like the political analysts who fail to seriously consider "Person leading in the polls wins" when predicting the outcome of an election.

In Part Two, I'll look at the trends that make continued exponential growth in carbon emissions a frighteningly plausible prospect (Spoiler alert: it's population growth and economic growth, plus a dash of human perversity.

In Part Three, I'll look at the 4 points offered as cause for optimism regarding RCP8.5, and how there's less there than meets the eye.
Posted by TheTracker at 1:46 PM