Subjects of the Empire of Denial 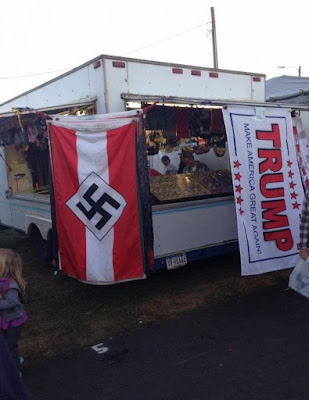 Denial has conquered the United States of America. To those of us who have been fighting climate deniers for years, this is a nightmare, a sickeningly familiar nightmare where the personality-disordered trolls and con men have exploded out of the comment threads and seized the reins of a great nation.

To the average citizen, the kind of people who have triumphed in our most recent election seem disturbingly unpredictable. They are by turns abusive and wheedling. They aver a broad range of fringe beliefs, untroubled by the explicit contradictions between them. And Americans are scared. They can sense the sickness of the denier, but do not understand them, and they are all the more frightening for that. But they can be understood, and it is critical to try and understand them, and in particular to understand their relationship to factual truth. 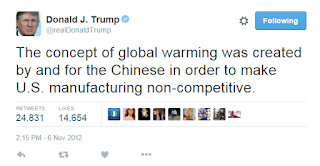 The thing you must grasp about a denier is that they don't care one whit about factual truth. It has no purchase with them. They exist in a world of emotion and spiritualism, in which the group and the cause are all.

They are not ideologues. They are not even fanatics. Fanatics believe in things, and will sacrifice to live out those beliefs. Deniers do not sacrifice, because sacrifice doesn't feel good, and feeling good -- feeling egosyntonic, not egodystonic -- is all.

Deniers are bullies and sycophants, and everything they say and everything they do refers back to that. They talk, and think, and reason in ways that are about tribal allegiance, in-group posturing. That is the only truth they care about -- the truth of "us" and "them."

To decent people, their behavior is baffling. They assert blatant lies, which they will defend passionately, but then suddenly abandon, sneering at the fools that treated those lies as important. Others, less creative but equally performers, will profess to believe those lies, even though in reality if you required them to stake their lives or even a hundred bucks on the factual truth of, say, the notion that the world is cooler than it was in the middle ages or that Mexico will pay tens of billions of dollars to build us a wall, they would never in a million years lay money down.

You may wonder why they lie, if on some level they know they are lying. The answer is that they perform belief in the same way the Japanese would draw and release empty bows, believing the noise drove away menacing spirits. As long as they see themselves as Good and the other as Evil whatever they say that embarrasses, frustrates, distracts, or stymies their Evil opponents (intellectuals, leftists, people of color, foreigners, Jews) serves the cause of Good.

The denier's sense of truth is emotional. What feels good to him is true. What feels bad to him, what provokes guilt or embarrassment, is an evil lie, probably put there by a Jew. 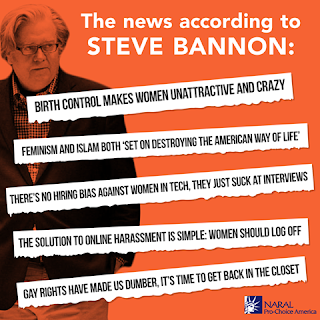 The denier's sense of the world is fundamentally childish, in the way that children identify authority with reality (everything is my parents' fault.) Atavistic, the denier regards facts as an emanation of power, as an expression of his evil enemies' agency. For the denier this is a moral struggle, a conflict between good and evil, and what we term the physical reality must ultimately reflect their wishes, because they are good and God is good. God would never permit the greens, socialists, atheists, women or Jews to be right. Therefore they are not right, whatever the evidence may be in this specific case.

The existence of a cold uncaring universe which will unfold implacably according to its own arbitrary laws, regardless of what we think or believe, is abhorrent to the denier, if he can grasp it at all. Clinging to a religious mindset (the world is divided between the saved and the damned; the saved know the truth and the damned are deceived; the true struggle is the moral struggle of the True Believers to save the world) they pursue religious solutions, professing their "truth," banishing doubt with faith, and seeking out the corrupters who lead honest folks away from the truth.

It follows that the denier is supremely unprepared for victory. While the denier is in rebellion, factual truth is seen as an aspect of the oppressor's authority. By denying reality the denier fights the oppressor. Once he must deliver results requiring navigation of reality that narrative no longer functions.

His reaction to this breakdown, predictably, will be one of denial -- denial, in this case, of his own power and agency.

You may expect him to double down on stories of invisible enemies, of malignant forces which somehow still threaten the Good, despite its apparent victory over all of its rivals. Nothing will be built up, nothing will be reformed or improved, because the denier is fundamentally not creative or inventive, but rather self-absorbed and petulant. As his failures mount, scapegoating -- always a key feature of deniers relationship to the world -- will become more aggressive. The denier's search for new enemies can become a lethal delusion.
Posted by TheTracker at 8:38 PM

Email ThisBlogThis!Share to TwitterShare to FacebookShare to Pinterest
Labels: deniers, Donald Trump is an idiot, Trumpkins