Where the climate disaster sits

The last few years have given the appearance of progress, but it's mostly an illusion. The underlying dynamic remains selfish, short-sighted governments, corporations, and individuals failing to accept the science and make a serious plan to cut carbon emissions dramatically.

The rate of CO2 growth has slowed over the past few years, but that's misleading. The slowdown is not originating from the replacement of fossil fuels with clean energy sources, rather, it is primarily the result of substituting one fossil fuel for another -- less coal, more methane. China has been the primary source of rising coal consumption for some years now, so their shift is illustrative: 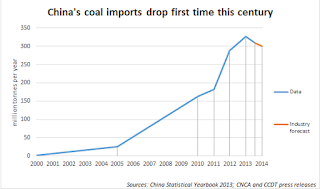 US consumption in recent years tells a similar story: 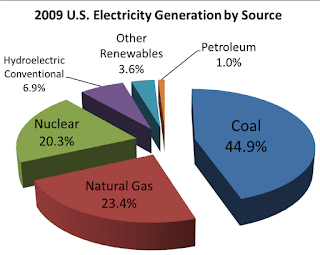 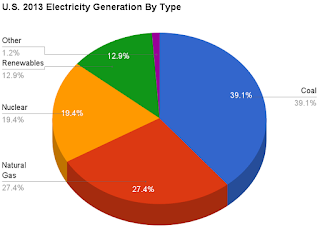 This is a lot of numbers and graphs for what is essentially an old man shaking a cane in blog form, but this is important. Coal has lost 6% of total electricity generation. But 2/3 of that, 4%, went straight to the burning of methane. Renewables snagged another 2% of the total, but half of those gains were lost when nuclear bleed away 1% of the total.

The additional 1% in clean energy sources likely made less of an impact on our total emissions than the 4% shift from coal to methane.

There was always going to be a transition between coal and natural gas, due to the immediate health effects of coal smog, and the discovery of fraking techniques that make methane easier, and even cheaper in many cases, to extract than coal. That this transition is happening does the world some good, but it does not say that we will continue to phase out coal when natural gas is not plentiful and cheap, or that we will make serious efforts to eliminate natural gas and all other fossils fuels from our energy mix, as we must eventually do.

The picture looks even bleaker if we include not only electricity but transportation fuels, which constitute 22% of CO2 emissions today (up from 14% in 2004.) Oil dominates the transportation sector, and despite some promising signs of a beginning of a mass market in electric cars, they remain an almost infinitesimal fraction of the motor vehicles on the road today.


The contribution that each individual country should make in order to achieve the worldwide goal are determined by all countries individually and called "nationally determined contributions" (NDCs).[13] Article 3 requires them to be "ambitious," "represent a progression over time" and set "with the view to achieving the purpose of this Agreement" (Source: Wikipedia.)

The entire agreement could be summed up as "Global warming is bad, we'd better cut GHG emissions -- everybody do their best with that, OK?"

Having spent so many hundreds of hours on climate deniers, I am by no means scornful of the accomplishment of getting most of the world's nations to agree that there's a problem and we need to do something about it. But seriously, this agreement fails in every way to resemble the global agreement we need to stabilize the climate. Such an agreement needs the following features:

1. Binding emissions reductions.
2. Independent agency with secure funding to calculate emissions.
3. Strong penalties for those that violate the agreement or refuse to participate (i.e., a total trade embargo.)
4. Agreed upon scoring for grey areas like land use changes, reforestation, shorter-lived GHGs, and CCS schemes.
5. Some agreed-upon financial support for countries, like India, who will be asked to forgo things like burning coal which facilitated others' industrialization. (This might take the form of grants towards disaster management and adaptation projects, for example -- trillions of dollars in adaptation spending is now inevitable.)

The Paris Agreement lacks all of these things -- which is likely why so many countries have signed it and ratified it. It's the cotton candy of climate accords. Even the poor much-maligned Kyoto protocol did better.

Physically, the world keeps getting warming, the seas keep rising and the ice keeps melting. The arctic is having an anomalous winter, the antarctic an even weirder summer: 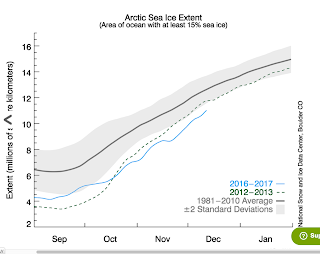 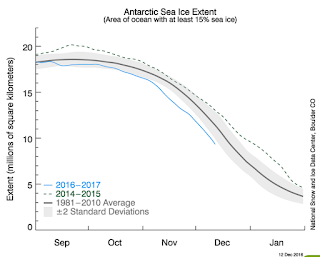 What a difference a year makes. Now climate scientists no longer have to explain why the Antarctic sea ice isn't doing the same thing as its northern cousin. They're twins! Of course, this is one more piece of evidence that the Antarctic is preparing to shed several meters of global SLR from its ice sheets, but every silver lining has its cloud, as they say.