What a "Green New Deal" Should Include -- But Probably Wouldn't

Alexandria Ocasio-Cortez's revival of the idea of a "Green New Deal" in recent weeks seems to be getting a little traction, at least among the Washington press corp. It's difficult to say whether it is a good or a bad idea because, like the Paris Accords, it is big on atmosphere and light on specifics.

In general, the idea of a Green New Deal is for an economic stimulus package that accelerates our transition to a more ecologically sustainable society. One might build solar panels and windmills, aggressively retrofit current buildings for greater energy efficiency, or build a network of public charging stations for electric vehicles.

In general, anything that spends money (excuse me "creates jobs") and is environmentally friendly could be considered a potential candidate for inclusion in a "Green New Deal." I am quite skeptical that any such plan, even if it could be articulated and passed into law, would contain the elements that could make a real dent in anthropogenic global warming, water scarcity, habitat loss, or any of our other serious environmental problems.

Most obviously, in the midst of a record-breaking period of economic expansion, with unemployment under 4%, a financial stimulus is hardly what we need at the moment. Rather, this would be an excellent time to make some of the difficult structural changes -- such as a carbon tax, banning the burning of coal, sunsetting federal flood insurance -- that might be impossible politically to undertake during an economic downturn.

But staying with the premise -- spending, not taxing, new programs, not legal or regulatory changes -- there are still many good investments we could make.

Here are ten things that should, but most likely will not, be included in any serious "Green New Deal":

1. A nuclear build-out on federal lands.

A single nuclear complex can incorporate as many as eight reactors, while modern reactor designs generate over a gigawatt of electricity (1.1GW, in the case of the AP1000.)

Twenty such complexes, build on federal lands to minimize commercial and regulatory hurdles, would generate enough electricity to replace every coal-fired plant in the United States, with all the oil, wood, and biomass thrown in. TWENTY. With the waste able to be stored indefinitely at the site itself. Forty could replace every fossil fuel plant in America.

The major obstacles to a nuclear build-out -- something we critically need if we are to have our emissions peak any time in the next few decades -- are NIMBYism and the business case. The federal government building on federal land would be in a better position than a local utility to resist NIMBYism. With the benefit of #4 (see below) the plants need not be located anywhere near where the electricity is being consumed.

And while nuclear can get rather expensive (although dirt cheap in comparison with the ultimate cost of burning fossil fuels) an order for 160-320 identical Westinghouse AP1000s should allow for some economics of scale -- a "mass produced" unit in contradistinction to today's "artisanal" nuclear power designs.

The optimal method of freeing up water resources would be leaning on farmers -- who use 80% of the water -- to adopt more water-efficient methods. But that has proven politically difficult and, for the purposes of this exercise, we aren't regulating. The brute-force solution to water scarcity is to simply make more of the stuff.

Desalinization costs less than half a penny per gallon and we could eliminate our entire consumption of "wild" freshwater (see also #9, below) -- giving our aquifers a much-needed opportunity to recharge -- for less than a billion dollars per year.

3. Electrification of the national rail network.

Currently diesel railroad engines emit between 30-40 million tons of CO2 per year. That can be eliminated via electrified rail, a hundred-year-old technology already well-established all over the world.

Current AC lines lose current rapidly, resulting in heavy losses over distances over a few hundred miles. A backbone of HVDC lines would make a real national power market possible with the ability to send electricity from any source, to any consumer, coast to coast.

While electric cars are making inroads, they are still vastly inferior to mass transit in terms of CO2 emissions. Even when charged from a clean grid, the production of battery-powered vehicles makes their life-cycle emissions -- while far better than a fossil-fuel-burning vehicle -- far from insignificant.

What the cities which get a significant percentage of their people out of cars and into mass transit all share is some sort of fixed-track infrastructure -- a subway, an elevated rail, a light rail system. Each of the top five performers (see graphic) have such a system, while most of the low performers do not. 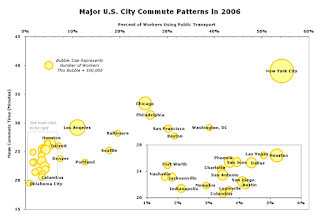 Does anyone remember when Hurricane Sandy hit New York, and during the approximately five minutes after in which we had a national conversation about the risks of climate change, and Lomborg came out and claimed hardening the coast would be much much cheaper than cutting emissions?

The numbers were wrong, the argument was a disgraceful mess, and to no one's surprise, once the heat died down deniers interest in actual, non-hypothetical adaptation vanished without a trace.

But the need is still there. The oceans are going to continue rising for centuries; that is about as close to an established fact as anything we can say about the future. And on past trends, we aren't going to abandon our economically and culturally central coastal cities. There's no time like the present to get in a Netherlands frame of mind.

American air travel is responsible for about 3% of our emissions -- a figure expected to double over the next 30 years. Americans drive 3.22 trillion miles per year, contributing to emissions from cars and trucks ten times those from aircraft.

One approach to this is fixing carbon from the atmosphere and using it to manufacture synthetic fossil fuels, including jet fuel. This is likely the best solution for international air travel. But domestically, a more ambitious solution would be high-speed ground transportation, using technologies with the potential to travel faster than airplanes without the cumbersome infrastructure of airports.

No one knows exactly what a system like that would cost, but at the price quoted for a proposed 560km hyperloop system ($7.5 billion) a nationwide system of 50,000km would cost around $700 billion. That's a lot of money (3.5% of the GDP) -- about what we spend annually on the military.

We should not be burning fossil fuels to generate electricity at all, but the rules of this exercise forbid proposing regulations or Pigovian taxes. If, therefore, we must assume coal and gas plants will continue to exists, they must at a minimum capture their CO2 emissions and store them in a stable form.

Once we have abundant fresh water thanks to #1, we need a system to supply it to regions far from desalinization plants, via a system of pipelines.

Evacuated-air trains, a water network, a system of HVDC electric lines -- all of these require the same basic infrastructure layout: track/pipe/lines connecting our major cities (throw in an upgrade of our fiberoptic trunk lines, as well.)

This would require not only large amounts of money but also eminent domain along the course of the "pipes." It could be the Interstate Highway system of the 21st century.

The United States Post Office owns over 200,000 vehicles. The Border Patrol operates "over 10,000 SUVs and pick-up trucks." In total, the US government, excluding the military, owns or leases about a half a million fuel-burning vehicles. Virtually all of them could be replaced with electric vehicles. This wouldn't be cheap -- assigning a back-of-the-envelope cost of $100,000 per vehicle (an estimate that takes into account that in addition to cars the government owns many pickup trucks, semis, fire engines, and other potentially expensive vehicles) this might cost $50 billion. But it would powerfully demonstrate that the future is not in ICEs and would create the conditions not only for mass production of electric vehicles but for a massive expansion of fast-charging stations -- and a government purchasing such a fleet could chose the charging standard that would become the default.


None of these things are likely to happen any time soon, not simply because of the mismatch between what feels "green" to most people (solar panels, wind turbines, etc.) and things which, although they have great potential to protect the environment, do not (nuclear power, desalinization, an upgraded electrical grid.

There is also a related problem which extends beyond environmental issues -- thinking too small. Private enterprise can be a powerful force for good in human affairs, and efforts to replace it with tight government central planning have been disappointing. But where the government can add value is projects which are too big for any private actor to undertake. The interstate highway system, rural electrification, the postal service, K-12 public education -- these are success stories, both in the sense of generating wealth and in expanding opportunities. But by definition, that sort of thing isn't cheap.

But in recent decades, the right's crusade against "big government" has taken its toll, such that even on the left, small targeted anti-poverty, environmental, infrastructure programs are the rule, and large nation-shaping public investments are the exception.

There are many benefits to thinking small, but there are also things you will never accomplish with a $5 million grant for a needle exchange in LA or $10 million dollars for redevelopment grants in Minot, ND. The above proposals would cost trillions of dollars. But climate change is doing to cost us trillions and trillions of dollars one way or the other, whether we mitigate it or adaptive preemptively or just wait for the hammer-blows of crisis to fall.