James Delingpole is a sensitive soul

You wouldn't know it from a Twitter account that proclaims "I'm right about everything," but James Delingpole is a tender-hearted soul who just can't abide insensitive folks like me.

James was wondering aloud when his critics would "apologize" by the people who "vilified" him, since he has now been proven right about something or other. I'm always interested in cultivating the acquaintance of the infallible, and his website made him seem really cool and approachable (and not at all narcissistic):


James Delingpole is a libertarian conservative who writes brilliant books and brilliant articles, and is really great on TV, radio and the internet too. You’ll love him. You’ll want to read his stuff, buy his book and music recommendations; follow him on Twitter, and generally be his best friend

Emphasis mine. Well, of course I can't just ignore people vilifying my new best friend, so I looked into James' purported martyrdom, and found this note that followed an investigation by the Australian Press Council:


The Council has upheld three aspects of the complaints. First, it has concluded that even if the REC scheme has the weaknesses alleged in the article it cannot tenably be described as a “kind of government-endorsed Ponzi scheme”. . . .
Second, it has concluded that the claim that a law firm sought gagging orders has been publicly denied by the firm and, in the absence of any supporting evidence, constitutes a breach of the Council’s principles concerning misrepresentation. . . .
Third, it has concluded that the report of the anonymous remarks concerning paedophilia, a very serious and odious crime, were highly offensive. The Council’s principles relate, of course, to whether something is acceptable journalistic practice, not whether it is unlawful. They are breached where, as in this case, the level of offensiveness is so high that it outweighs the very strong public interest in freedom of speech.

The article itself is replete with hyperventilating allusions to:


[C]hickens [] laying eggs without yolks; [] ewes were giving birth to deformed lambs; their once-active dogs spent their days staring blankly at the wall  . . .


[S]huttered houses and a dust-blown aura of sinister unease, as in a horror movie when something dreadful has happened to a previously ordinary, happy settlement and at first you're not sure what. Then you look up on to the horizon and see them, turning slowly in the breeze . . . 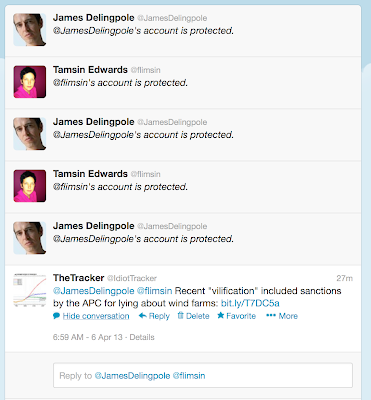 Posted by TheTracker at 7:50 AM