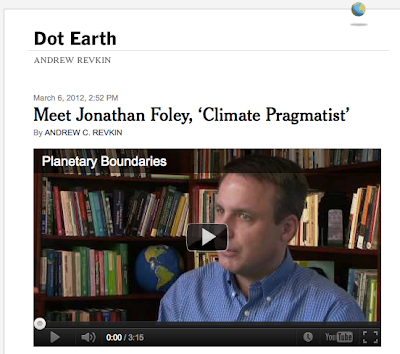 The argument is one we've seen before:

Many of my conservative friends are deeply suspicious of climate change, and they hate carbon taxes and cap and trade. They’re not interested in adapting to a supposedly hypothetical future. Fair enough. Everyone is entitled to an opinion [But not their own . . .] . . . .


Guess what? Many of the things that help reduce the threats of climate change can also be good for our economy and national security, and vice versa. Many of the changes proposed to adapt to climate change are readily justifiable as approaches to shelter our wealth and well-being against the erratic forces of nature such as Hurricane Katrina and the recent floods in Australia. Why not work to boost innovation, the economy, disaster preparedness and national security, and be pleasantly surprised when greenhouse gas emissions and vulnerability to climate change go down, too? Why not approach the debate from another direction, and be happy that we find allies instead of adversaries?

I'd like to think I'm very happy to find allies wherever on the political spectrum they might reside. But this specific approach is fraught, and not just because we have watched for the last three years as our tax- and spending-cutting, moderate-appointing, terrorist-killing president has been universally vilified by the right as the second coming of Lenin. As Revkin says, if you can grab the middle you can marginalize the fringes, and we're going to have to, whatever the game plan.

But is it worth it to dilute and muddy a very clear message -- we are radically change the climate in dangerous ways -- in order to frame action in terms of goals that haven't motivated the public to act by themselves? The benefits of mitigation and adaptation both for national security, the economy, innovation etc. have been extensively discussed and, on the right, dismissed. Fighting climate change has been discursively "coded" as a left-wing thing, and arguing that it advances right-wing and all-wing goals isn't going to change that. It's the different-values fallacy again; the idea that the right wants different things, and by offering them different things you bring them over to your side.

But the right doesn't want different things, and the appeal to the middle is the appeal to our shared values, to our shared interest in fighting climate change. We need to change, subtly, the emotional coding of the fight against climate change, not abandon what we have argued and believe is the central challenge to our 21st century civilization just so we can sell tired, nonspecific election year patter about "innovation" and "national security." The winning angle to not to make people respond to the idea of "national security," but to give them in a form they understand a visceral sense of the literal, specific threat to our nation and our world. It's about our common fate, not issues potpourri. As one master of the revolutionary middle ground put it:

"For, in the final analysis, our most basic common link is that we all inhabit this small planet. We all breathe the same air. We all cherish our children's future. And we are all mortal."