Idiot of the week: John McCain 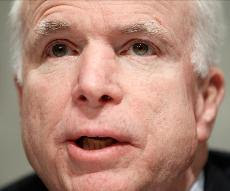 John McCain used to be the kind of republican you could imagine as president. He was a guy you disagreed with rather than deplored; a guy who could take unpopular positions that riled his own party and talk straight (yes, there was at one point a basis in fact for that meme) about the country's problems.

Today he's a shell of his former self. Perhaps he got too close to the top job, and the quest for that little extra something that would put him over the finish line, his integrity was fatally wounded. Regardless, his obstructionism and hyperpartisanship are just sad.

Sunday McCain proclaimed “I never considered myself a maverick.” In honor of what we hope is the final and ultimate McCain flip-flop, here is the Daily Show's pitch-perfect skewering of the McCain in 2008: "Reformed Maverick"
Posted by TheTracker at 4:35 AM