In a prior post, we touched on the evidence that the globe is warming. The next logical question is: Why? Let's avoid the elephant in the room for the moment: the greenhouse gases. What are some of the alternative explanations?

It's the Sun: Watt's favorite suspect. But if we look first at temperatures: 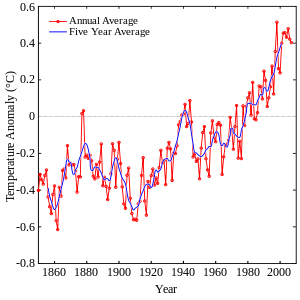 And then at solar irradiance (using sunspots as a proxy):

. . . we can see that is the past 50 years temperatures have gone way up, while the intensity of the sun is currently at a low ebb, and has never over that period been particularly intense, relative to historic conditions.

And that's about it.

2. It's the water: There are a real dearth of multi-decade climate cycles to try and pin thirty years of dramatic warming on, but "skeptics" point to the Pacific decadal oscillation as a potential cause of recent warming. This fails to make sense for a lot of reasons, but the quickest way to refute it is to look at ocean heat content: if the dramatic warming of the air were due to heat emerging from the oceans, the amount of heat in the oceans (the heat content) would have to decline: if the globe is not warming overall, heat leaving the oceans means less heat in the oceans overall. Yet the oceans' heat content is increasing along with the rest of the globe:

It's not cosmic rays. That's an idiotic idea. I don't even want to explain how that one is supposed to work. Just compare cosmic rays to temperature:

Notice the cosmic rays go down, and the temperature goes up. So much for that.

This may all seem too easy. It is, in fact, really easy, if you come to the thing with an open mind. If you come to it determined to pull for your "side," and find fault with the science, if you surrender to what the psychologists call confirmation bias, then nothing is ever simple unless it proves you right. Hence denialists spend a lot of their time arguing that the temperature records are faked, or the sunspot counts are unreliable, or whatever. They attack the data. When they can't attack the data any more, they attack the people: Mann, Hansen, Gavin Schmidt, Al Gore. Anyone and everyone presenting evidence that people are changing the climate in dangerous ways. I'll delve into some of those ad hominem attacks in a future post.
Posted by TheTracker at 7:04 PM