We have arrived at an interesting place. ENSO and the solar cycle are the two major short-term influences on global temperatures (absent a major volcanic eruption.) They are now both as neutral as neutral can be: 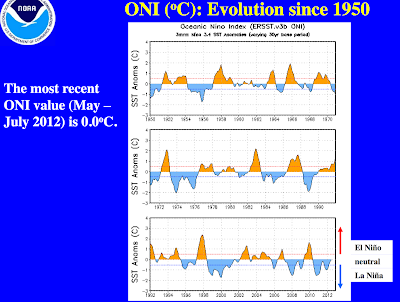 Zero point zero. ENSO is balancing on the head of a pin. Now the solar cycle:

Temperatures are as normal as they are gonna get. Shall we take a peek out into the world and see how the new normal is treating it?

It's no longer melting over 96% of its surface . . . that's a comfort. But it's hard to look at these albedo numbers and think that all is well. This is some disturbing shit. A difference of 5% in the albedo compared to the average? That's a lot of joules . . . right where we don't want them.

Looking northwards, Dr. Jennifer Francis has a great presentation on how the changes in the Arctic are changing our weather. Key slide here: 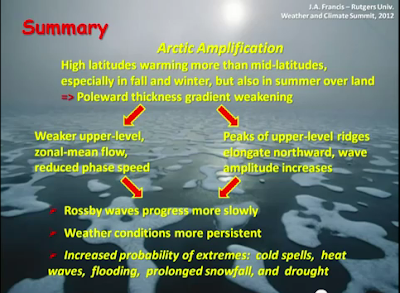 And speaking of extremes, the contineintal US had its hottest July ever, and more importantly, drought and heat in the US have sent food prices skyward:

In July, food prices jumped 6%, after three months of declines, according to the United Nations' monthly Food Price Index released Thursday. The main drivers behind the increase? Grain prices. And more specifically, corn prices, which have hit record highs in recent weeks.
According to the U.N. report, global corn prices surged nearly 23% in July, exacerbated by "the severe deterioration of maize crop prospects in the United States, following drought conditions and excessive heat during critical stages of the crop development."

Since we so recently learned that big thunderstorms can chew up the ozone layer over North America, perhaps we should check on thunderstorms in our new world:

Note that the graph ends in 2011. The crazy thunderstorms that have wracked the Midwest and Northeast over the last two months don't show up yet.

Torn to pieces by an Arctic cyclone, the thin sea ice up north is rapidly giving up the ghost.

Both the cyclone, and the thinness of the ice that got walloped, were fueled by Arctic warming and accelerate it further.

In the upper left you can see a huge chunk of the ice sheet break off and go its own way. This is not, to say the least, a common occurrence, and the ice sages at Neven's seem to be in agreement that this has never been seen before in thirty years of satellite observations.

Both solar activity and the ENSO index are still rising. Be interesting what the world looks like in an extra-warm year, won't it?
Posted by TheTracker at 9:16 AM