Threats against climate scientists -- a glossary 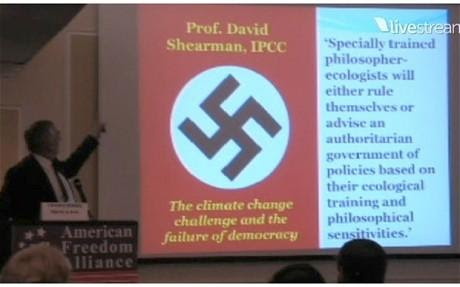 I looked around on the interwebs and didn't find a good glossary of the relevant articles. So here are a few of the sources, starting with one of the few articles to directly quote the threats.

Bullying, lies and the rise of right-wing climate denial

"If we see you continue, we will get extremely organised and precise against you."

When Pitman politely replied to the last, the response was more aggressive:

"F**k off mate, stop the personal attacks. Just do your science or you will end up collateral damage in the war, GET IT."

All threats have to be taken seriously, and at times warrant calling in the police. The police are able to trace anonymous emails to their sources and take action against those who send them. The police are now advising those who received abusive and threatening emails to resist the immediate urge to delete them and keep them in a separate folder for future reference.

Climate campaigners have also noticed a surge in the frequency and virulence of this new form of cyber-bullying. The following was received by a young woman (who asked that her name not be used):

"Did you want to offer your children to be brutally gang-raped and then horribly tortured before being reminded of their parents socialist beliefs and actions?
"Burn in hell. Or in the main street, when the Australian public finally lynchs you."

Another campaigner opened her inbox to read this:

"Or you will be chased down the street with burning stakes and hung from your f**king neck, until you are dead, dead, dead!

"F**k you little pieces of sh*t, show youselves in public!!!"

Especially widely publicized have been the death threats against scientists at Australian National University in Canberra, which promoted police to move several scientists to more secure housing:

A spokeswoman at the University of New South Wales didn't respond to questions about the threats but noted in a press release that scientists there had "reported receiving abusive e-mails and phone calls, including threats of violence, sexual assault, or attacks on family members." A recent article in the university's magazine, Uniken, described the ridicule and vitriolic personal attacks heaped on one professor, Andrew J. Pitman, director of the Centre of Excellence for Climate System Science, as a result of his media appearances.

A public-affairs officer at Australian National said the death threats there had occurred over the course of three years and had escalated in recent months. As a result, nine scientists were "moved to a more secure location that requires card access."

The scientists revealed they have been told to "go gargle razor blades" and have been described as "Nazi climate murderers".

Mann, of course, is a favorite target:

"6 feet under, with the roots, is were you should be," one e-mail reads. "How know 1 one has been the livin p*ss out of you yet, i was hopin i would see the news that you commited suicide, Do it."

"Your work is finished. YOU ARE GOING TO HANG SOON!"

Scientists are pushing back against these tactics:

The world’s largest general scientific body, the American Association for the Advancement of Science, says it’s getting alarmed by a growing pattern of threats against climate researchers.

But the threats continue.

Besides the well-publicized threats like the public noose-waving, there are hundreds if not thousands of violent threats by climate deniers posted to climate denier blogs on a daily basis, like this one from the Mothership:

Hm. I thnk the “painted themselves into a corner” imagery is entirely inadequate.

How about “stuck their necks in a noose” instead?

Dunno about other readers, but I’m ready to haul up on the line and make it fast.

The fact that threats like that are still tolerated at places like WUWT tells me the climate "skeptic" movement has really not adjusted to the fact that one of their own stepped beyond rhetoric and murdered dozens of members of what he called the "eco-marxist conspiracy."

Brevik is in police custody, but his ideology lives on:

shame on you physicist for throwing your lot in with the collectivist vermin plotting to destroy the one example in human history which gives the proverbial “little guy” a fighters’ chance to better himself on his own terms; not to mention, where will you be, physicist, when the defenders of freedom and personal liberty are dead and gone and the totalitarians wish to purge the dead weight of the useful idiot?

It's important to realize, in this context, that despite the wish of many right-wingers to disassociate themselves from acts of violence and specific threats, the gap between calling someone "vermin" who are "plotting to destroy" you, and advocating violence against those conspiring "vermin," is very small.

Those engaging in the rhetoric of dehumanization and paranoia share responsibility for people who translate their words into actions -- if you really believe that certain people are "vermin" who are plotting to destroy your society, violence against them would certainly seem justified.

There is evidence of a direct link between the violent vilification of climate scientists by "mainstream" deniers and the threats:


[The late climate scientist Stephen] Schneider described his attackers as "cowards" and said he had observed an "immediate, noticeable rise" in emails whenever climate scientists were attacked by prominent right-wing US commentators, such as Glenn Beck and Rush Limbaugh.

What causes the rise? Publication of his email addresses on the sceptic website Climate Depot presumably helped. The comment Schneider made in July make sobering reading in the light of the Giffords attack:

Schneider said the FBI had taken an interest earlier this year when his name appeared on a "death list" on a neo-Nazi website alongside other climate scientists with apparent Jewish ancestry.

UPDATE: We're seeing an emerging meme from Jo Nova, Anthony Watts and their many useful idiots trying to downplay these threats or deny them outright. One of their completely absurd talking points is that police are not investigating these threats. On the contrary:

Two of the scientists involved in "Climategate" – the e-mail hacking incident at the Climatic Research Unit (CRU) of the University of East Anglia, UK – have been emailed death threats since the contents of their private e-mails were leaked to the world. No further information can be revealed about these particular threats at present because they are currently under investigation with the FBI in the United States.

The scientist at the heart of the climate change email scandal was today interviewed by police about the scandal. . . . Sources said the interview concerned the theft of emails from the university and alleged death threats since the contents of the emails were released, adding he was being treated as a 'victim of crime' rather than a suspect in any criminal investigation.