Has Christopher Monckton ever won a lawsuit?


Christopher Monckton is an ignorant, incompetent, dishonest, delusional mess of a gibbering idiot. I've reported on this fact for years and I have yet to hear from any lawyers, which is why I was skeptical that the Nova-Monckton account of him repeatedly crushing his enemies in lawsuits was anything other than a slop bucket of narcissistic lies(*).

First claim: Monckton sued the British government over using An Inconvenient Truth in schools, and won.


We have had some good court victories. In 2007 the London High Court condemned Al Gore’s mawkish sci-fi comedy-horror movie. It found nine errors so serious that the court ordered 77 pages of corrective guidance to be circulated to every school in England. The judge said: “The Armageddon scenario that he [Gore] depicts is not based on any scientific view.”
Two days later, Gore won the Nobel Mickey Mouse Prize. But he was holed below the waterline. Now he is seen not as a prophet but as a profiteer.
The whingers of the do-nothing brigade were at work even then. The lawyers refused to file the case on the ground that there was no chance of success. They were fired.
The new lawyers said we could not possibly win on the science and refused to use any scientific testimony. The judge threw the case out. I recovered the position by instructing the lawyers to write to the judge asking if he had even seen Gore’s movie before he had reached his judgment without holding a hearing.
Tellingly, the judge did not reply. I insisted on – and got – a new judge. This time the lawyers did what they were told. I wrote 80 pages of scientific testimony. Bob Carter and Dick Lindzen– bless them both – worked from the document in crafting their evidence, and signed off as expert witnesses. As soon as the other side saw it, they collapsed and settled, paying the plaintiff $400,000.

Reality: Monckton wasn't one of the litigants in that suit, which the deniers lost. The quote from the judge, which I've bolded above, is a fabrication -- a total fiction (for a comparison with what the judge actually said, see this outstanding analysis, beginning at the two-minute mark.)

He claims to have asked one of his friends to fund Stewart Dimmock, who actually sued. Dimmock has been asked who helped fund his suit, at refused to name anyone, calling it "a private matter." Many sources, understandably, report this as fact, because who would lie about participating in a failed lawsuit? But the reality is that Monckton lies constantly, habitually, and always by way of growing the legend of Monckton.

The case, Dimmock v Secretary of State for Education and Skills, wasn't settled, and Dimmock didn't get a payment of $400,000. He did, as is routine in British legal battles, win a payment for a portion of his legal costs, leaving him 60,000 pounds poorer.

His stated objective in the lawsuit was for An Inconvenient Truth not to be shown in schools any more. The judge rejected that request.

Monckton claims to have been involved in funding this failed lawsuit, but as far as I know, no one actually involved in it has confirmed that, placing his role in the same category as his claimed discovery of the cure for AIDS.

The second win claimed by Monckton has already been exposed as another fantasy: he claimed that Mann had settled a lawsuit with Tim Ball for a million dollars. Whoops! Pure fiction, and Jo Nova was troubled to print a correction.


I sued the BBC a couple of years ago when they did a hatchet job on me. I had been told – in writing – that I should have the chance to alter any points that were inaccurate. Fat chance.

I insisted on seeing the programme before it was broadcast. It was a disgrace. I wrote to the Director-General listing two dozen factual errors and numerous other biases in the schlocumentary. No reply.
So I lodged a High Court application for an injunction. The BBC’s first reaction was to deny that the director-general’s office had received my letter. Not having been born yesterday, I had delivered the letter myself and had insisted that the director-general’s personal assistant should sign for it.
The BBC crumbled and cut the programme from 90 minutes to an hour, taking out the overwhelming majority of the vicious nonsense. There were still some objectionable points, so I went into court.
I fought the case myself. When I introduced the two barristers and three solicitors for the Beeb, the judge interrupted me and said: “Lord Monckton, I fear I must draw your attention to a potential conflict of interest. You see, I am a member of your club.”
I had no objection and invited the BBC’s expensive QC to give his opinion. He had no objection either, but added: “Er, I too have a conflict of interest. I also am a member of Lord Monckton’s club.”
The judge did not prevent the Beeb from leaving a few barbs in my side. The BBC issued a lying statement that I had lost. But the judge held that I had “substantially won” the action. A 90-minute programme had become 60 minutes. The Beeb had lost. Big-time. 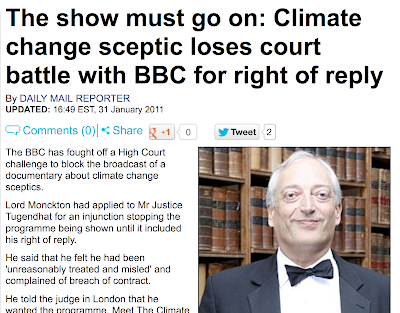 He lost, of course. Really this story gets to the heart of why Monckton is such a memorable liar. It's full of specific details -- about the club, and the judge, and the director-general's personal assistant. Yet nothing that can be easily checked, nothing that can be readily verified. It's full of numbers -- two dozen errors, 90 minutes to an hour, two barristers and three solicitors, etc. And it has a simple story of Monckton prevailing against odds. Really the only weakness of the story, as is typical of Monckton, is that he cannot control his own narcissism long enough to sell the story. Monckton is always the least believable part of a Monckton anecdote. He demands! He sues! He belongs to a fancy club! He takes on an army of lawyers and wins!

Monckton has surely mastered the Big Lie(**), as his fictional legal career illustrates.

Monckton has also threatened legal action against George Monbiot after an article dissecting Monckton's dishonest hackery. (He claimed it was "libellous of me in my calling.") But no lawsuit ever emerged. He promised to have John Abraham brought up on charges of academic misconduct; he didn't. He made the same threat about Dr. Barry Bickmore: again, no follow-through.

So here is my question of the day: Has Monckton ever actually followed through on his profuse threats, undertaken legal action against a critic, and won a judgement against them? Or are his repeated claims to have done so -- claims that have now progressed to advocating specious lawsuits against critics as a strategy, since it's worked so well for him -- simply another of his narcissistic fantasies?

** The Big Lie is a propaganda technique described by Hitler in Mein Kampf:


All this was inspired by the principle--which is quite true within itself--that in the big lie there is always a certain force of credibility; because the broad masses of a nation are always more easily corrupted in the deeper strata of their emotional nature than consciously or voluntarily; and thus in the primitive simplicity of their minds they more readily fall victims to the big lie than the small lie, since they themselves often tell small lies in little matters but would be ashamed to resort to large-scale falsehoods. It would never come into their heads to fabricate colossal untruths, and they would not believe that others could have the impudence to distort the truth so infamously. Even though the facts which prove this to be so may be brought clearly to their minds, they will still doubt and waver and will continue to think that there may be some other explanation. For the grossly impudent lie always leaves traces behind it, even after it has been nailed down, a fact which is known to all expert liars in this world and to all who conspire together in the art of lying.

Monckton, exceptionally, explicitly admits to hiding behind this cognitive glitch:


Abraham’s approach is novel. He’s saying not that I got one thing wrong but that I got just about everything wrong. And how plausible is that?

Posted by TheTracker at 6:07 AM