Posted by TheTracker at 2:41 PM No comments:

Judith Curry and Charlie Sheen: Winning like a eight-car pile-up.

JC’s comments
First, the three pillars of the U.S. Global Climate Initiative are examples of robust, no/low regret policy options. As I have argued previously, emissions stabilization target is not a robust policy options. I view the U.S. Initiative as positive, and this is something that makes sense and I can generally support.
Second, I was struck by Hasting’s testimony where he described the collaborative effort between the libertarian AEI, the Brookings Institution and the progressive-leaning Breakthrough Institute in California, to consider Hartwell-style low/no regrets policy options. It looks like this group could be developing some bi-partisan common ground policy ideas.
And finally, with the exception of Elliot Diringer, none of the others felt that the UNFCCC Kyoto extension was desirable or viable, and this reflects the position of the Obama administration as per Stern’s testimony.
Message to climate scientists (especially in the U.S., and especially the climate/science establishment): now that the UNFCCC treaties do not seem to be desired by even the most progressive U.S. administration in recent (and likely future) decade, please rethink your allegiance to the UNFCCC/IPCC ideology. Let’s get back to doing climate science as it should be done: challenging every aspect of the climate science to broaden and deepen our understanding of the climate system and the full range of possible future climate scenarios associated with both natural climate variability and anthropogenically forced climate change. And supporting policy makers in developing and assessing a broad range of robust, no/low regrets policy options.

You want to look away, but you can't. Lest we forget, Dr. Judith Curry is a member of the tiny, tiny minority of published climate scientists who while accepting the basic physics of climate change, have embraced the pseudoskeptical outlook.
It's hard to believe a PhD wrote the above lines, and not just because they clearly were not proofread ("emissions stabilization target is not a robust policy options.") The whole thing resembles a rambling post of WUWT, and not just because the grammar is atrocious and the word choices frankly nonsensical, as in:

Message to climate scientists ["message to climate scientists," really. Do you see what I mean?] (especially in the U.S., and especially the climate/science establishment [What, you are a full-time professional scientist? That's SO Establishment, man]) now that the UNFCCC treaties do not seem to be desired by even the most progressive U.S. administration in recent (and likely future) decade, please rethink your allegiance to the UNFCCC/IPCC ideology.

Most progressive "in recent decade." Proofread, Judith, proofread: you sound like a brain-dead hick, and unfortunately the substance of your essay does nothing to correct that superficial impression.

There are so many, many things wrong with this. The Obama administration is less progressive than the Clinton administration, which was eight years prior. It has not closed Guantanamo Bay, not allowed the Bush tax cuts for the wealthy to expire, not prosecuted torturers, not signed card-check legislation. The notion that this is really progressive or leftist government is a Fox News staple, which seems to rely, in the end, solely on the president's skin color in order to make its case. It's an loathsome little bit of propaganda to slip into an essay.

And she slips in, by-the-by, that future decades will see only more conservative administrations. Really? Talk about ignoring uncertainty. Has she seen the recent crop of Republican presidential candidates? If they are going to rule the US for decades to come, eventually you're going to have to find someone that is in some small way likeable without being batshit insane. No sign of suchlike as yet.

And can we talk about the phrase "the UNFCCC/IPCC ideology"? Again, that took me right back to the flame wars on WUWT, where any thinking one didn't like was an "ideology," and usually a "totalitarian ideology" as in "the totalitarian ideology of rent-seeking 'scientists' who loathe our freedoms." You think I'm kidding? Here's an actual quote:

The name “Political Correctness” originated as something of a joke, literally in a comic strip, and was used to make fun of the extreme left wing. But now it is deadly serious totalitarian ideology, – cultural Marxism.

Needless to say, supporting an international treaty to reduce greenhouse gas emissions is not an example of an ideology; it's a tactic. The tactic addresses a problem. The problem is that the world is on a road to becoming much less hospitable to human life. The only way to pull an "ideology" out of that line of thought is if you think preferring life to death and prosperity to poverty is an "ideological" perspective.

Curry's "solutions" are for climate scientists to stop supporting binding limits on greenhouse gases, and instead "get back to doing climate science as it should be done: challenging every aspect of the climate science to broaden and deepen our understanding of the climate system and the full range of possible future climate scenarios associated with both natural climate variability and anthropogenically forced climate change."

So evidently she thinks climate scientists have been so consumed by Kyoto that all scientific work has halted. The not-so-subtle implication is that present scientific work is mere propaganda to support emissions targets. The impetus for this among scientists is clear pure evil, aka progressive politics, since there exist "a broad range of robust, no/low regrets policy options" that scientists are ignoring (Curry herself ignores the huge body of work addressing the secondary benefits of emissions reductions, land use changes, reforestation and many other "low regrets" policies – policies that are loathsome to the right not because they have the potential to be very costly or otherwise "regrettable," but because the right DOES act out of an ideology that conceives of any government action as tyranny.)

Her main tactic seems to be throwing up layers upon layers of an increasing shaky edifice as quickly as possible hoping that no-one will notice that the foundations are collapsing as quickly as people can read.

This study on crop yields and warming has been all over the news recently, with great background here and great analysis here. These results compliment earlier research, which found:

Days above 30°C are particularly damaging. In otherwise normal conditions, every day the temperature is over this threshold diminishes yields by at least 1%. Moreover, days where the temperature exceeds 32°C do twice the harm of those at 31°C. And during a drought, things are worse still. Then, yields take a hit of 1.7% per day over 30°C.

This matters because increasing the average temperature only a bit can multiply the number of the hottest days a lot. The research predicts that a 1°C rise in average temperature will reduce yields across two-thirds of the maize-growing region of Africa, even in the absence of drought. Add drought and that effect spreads over the entire area.

The Economist, bless them, trust their readers know why a linear increase in temperatures produces an exponential increase in really hot days. But for the benefit of my fellow liberal arts majors, let me illustrate. Temperatures, like most quantities determined by the interaction of multiple factors (height and longevity are other examples, but this in fact applies to the behavior of most outputs of most systems) fall along a Gaussian distribution, aka a bell curve:

This is one of the more useful statistical concepts to get comfortable with. It's intuitively obvious, but often we make mistaken deductions about systems with the idea that the outcomes on the edge of the distribution are far more common and representative than they really are. 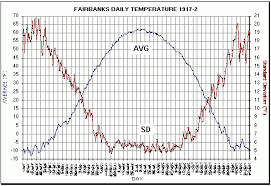 So what happens to this curve if you warm things up a bit, if you shift the average?

(Don't you love it when the very image you want is right there waiting for you on Google images? Isn't the internet grand?)

One thing that happens when you increase the average temperature, shifting the curve to the right, is that the thin edge of the curve goes into new territory . . . and hence you get new temperature records. You also get a lot of days that are one or two degrees warmer than average, but you had a lot of those to begin with, right in the fat part of the curve. Where you are going to see a dramatic change is in the days that used to be in the wedge, but have now been pushed towards the middle. Because if you look just at that part of the curve, you see this:

But by shifting the curve to the right, we move our 30C or 32C day to the left, so if we flip the curve into the conventional orientation, rightward towards the future, we get:

And finally we have a picture of what is going to happen, and in fact is already happening, to the number of crop-wiltingly hot days.

Believe it or not, this is not the worst news in the climate realm this week. That honor goes to the UN study projecting further population growth through the rest of this century, peaking not at nine billion, but reaching ten billion and beyond. More on that anon.
Posted by TheTracker at 4:41 AM No comments:

Posted by TheTracker at 2:24 AM No comments: