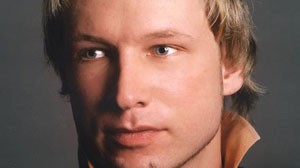 This is all highly speculative and totally unconfirmed, but among the many rumors floating around about the right-wing thug and child-killer Anders Behring Breivik, who murdered some 80 (and counting) Norweigens, it is thought he may be the infamous white supremacist and climate denier "Fjordman":

Anders Behring Breivik has previously driven the blog Fjordman and later for many years been a writer for the anti-Muslim and Zionist bloggers Gates of Vienna and Jihad Watch, under the pseudonym Fjordman.

On July 17, released Anders Behring Breivik a message on Twitter where he writes that “One person with a belief is Equal To The force of 100,000 WHO Have only not raised.”

After it was revealed that much of the data regarding alleged man-made global warming was deliberately fabricated, which constitutes one of the largest and most expensive anti-scientific frauds in history, most of its Leftist backers continued as if nothing had happened. The fact that they had promoted outright lies and slimed their opponents based on these lies mattered little.

He's also a fan of the looney cosmic ray theories deniers cling to:

Henrik Svensmark and his colleagues carried out a landmark study of cosmic rays and clouds. They demonstrated that such rays could produce small aerosols, the basic building blocks for cloud condensation nuclei. The condensation of clouds affects the energy balance and by extension the temperature on Earth. They received support for these studies from the Danish Carlsberg Foundation, founded by the beer producer which was an early pioneer in scientific brewing.

This is early days . . . we don't know if Anders Behring Breivik is Fjordman, or what he believes. I'll happily update this post tomorrow if the speculation proves to be unfounded. But one has to at least ask: does this mark the day when climate deniers, spurred on by their right-wing propaganda and paranoid fear of anyone on the left, moved from waving nooses in people's faces to actual terrorism, from threatening children to killing children?

Norwegian TV2 reports that Breivik belongs to "right-wing circles" in Oslo. Swedish news site Expressen adds that he has been known to write to right-wing forums in Norway, is a self-described nationalist and has also written a number of posts critical of Islam.

Certainly sounds consistent with what we know of Fjordman. And a news site (I think) in Norway reports:

Anders Behring Breivik, according to own data, previously driven the blog Fjordman and later for many years been a writer for the anti-Muslim and Zionist bloggers Gates of Vienna and Jihad Watch, under the pseudonym Fjordman.

UPDATE: Given the cache of posts by Anders Behring Breivik, now available in English translation here, I doubt he is "Fjordman." He is a self-professed admirer of "Fjordman" and his theories, praising him repeatedly, but unless he is unusually narcissistic, they seem to be different people.

Breivik appears in the documents as a right-winger obsessed with Muslims and "socialists" and "Marxists," much like many climate deniers, but climate change, one way or the other, does not seem to be one of his main preoccupations.

Where Breivik certainly does intersect with the climate denier perspective is in this paranoid hatred of the left, this invocation of the nearly vanished ideology of Marxism as a vital and powerful force guiding anyone not firmly with the consensus of the extreme, racist, xenophobic, anarchist right. These shadows became so real to Breivik that he murdered dozens of the children of members of Norway's mainstream center-left Labor party.

This is something we've seen time and again on denier sites, or anywhere deniers are lightly moderated, including the New York Times Dot Earth blog, the Blackboard, and Climate Etc. Of course it is endemic to sites like WUWT, Climatequotes, Climate Depot and many, many others.

I'll be highlighting some of these comments in the coming days to illustrate the links between this far-right ideology and those who are in denial about global warming. The relationship between this ideology and political violence is now, sadly, only too apparent.

UPDATE: Breivik does claim to be Fjordman, at least by the translation (of his manifesto) I have:

This is actually sound advice and in my view the strategy Western survivalists should follow. When I first started writing as Fjordman I focused on how to “fix the system.” I’ve gradually come to the conclusion that the system cannot be fixed. Not only does it have too many enemies; it also contains too many internal contradictions. If we define the “system” as mass immigration from alien cultures, Globalism, multiculturalism and suppression of free speech in the name of “tolerance,” then this is going to collapse. It’s inevitable.

Current events are confusing! We do know, based on Breivik's manifesto, that he's a climate denier, but whether is is Fjordman is still up in the air. Perhaps Fjordman is a shared handle, and he has sometimes been Fjordman, like a guest blogger, and sometimes not?

If a more definitive answer becomes available I'll post another update. Meanwhile, we have direct evidence from the manifesto as to Breivik's climate denier beliefs.
Posted by TheTracker at 7:54 PM