Permafrost and climate change: a primer

This great 2008 article runs through the basics of what we know.

Point the first: there's a lot of carbon there.


Still, 1672 Pg could be an underestimate of total soil C pools in the permafrost region, because deep soils were only considered for one area in northeastern Siberia and for river deltas, and because the soil C content in the 2- to 3-m layer of most mineral soil orders was conservatively estimated because of data scarcity. Both the 2- to 3-m layer and the deep soil C estimates should be considered preliminary because a relatively small number of data points are extrapolated to large areas, but this provides a general outline to the size of this deep C pool. Overall, this permafrost C pool estimate is more than twice the size of the entire atmospheric C pool, and it is more than double previous estimates of high-latitude soil C (Gorham 1991, Jobbágy and Jackson 2000). The 0–3 m permafrost-zone soil C estimated here at 1024 Pg represents a large fraction of world soil C stocks; global soil C stocks from 0 to 3 m depth (peatlands not included) have been estimated to be 2300 Pg (Jobbágy and Jackson 2000).

While the general picture is clear -- permafrost warms, and some of the carbon stored therein makes its way into the atmosphere -- there are a bewildering array of factors that affect how much and what kind of carbon is released in warming conditions by a particular piece of permafrost.

The freezing point of water is a change of physical state that causes orders-of-magnitude threshold changes in biotic processes, including decomposition rates (Monson et al. 2006). It is important to recognize, however, that microbial decomposition of organic C occurs below 0°C in films of liquid water (Price and Sowers 2004). Subzero increases in permafrost temperature can, in theory, have impacts on C losses to the atmosphere, albeit at lower levels. The phase change from water to ice also controls thresholds in abiotic processes. Although permafrost thawing can occur gradually as the thickness of the active layer increases, it can also occur more abruptly through development of thermokarst (ground surface subsidence caused by thaw of ice-rich permafrost) and erosion. The extent and rate of these processes depend highly on initial ground-ice content and other landscape attributes (Osterkamp et al. 2000). They have major impacts on whole- ecosystem C cycling and on the fate of thawed permafrost C because erosion and river transport are significant C loss pathways at regional scales (Berhe et al. 2007).

The particular composition of the permafrost -- the mineral content of the soil, the proportion of water, the local biota -- strongly affect the scale and nature of the emissions. Relative emission rates are calculated for bogs, acidic fens, intermediate fens, cedar swamps, tamarack swamps, and meadows (I was happy to see that meadows proved to be the least GHG-producing terrain type. I've always liked meadows, and I wouldn't want to have to change my opinions. The worst, by far, are the bogs, but who likes bogs to begin with?)

The article discussion four separate mechanisms of permafrost thawing that vary in importance at different stages of warming:

Four different mechanisms that can thaw permafrost. Each panel represents a hypothesis of the relative importance of that mechanism through time as permafrost thawing progresses. (a) Active layer thickening is the most important mechanism early in permafrost thawing as air warming affects the surface permafrost, but then decreases in importance as taliks begin to form. (b) Talik formation occurs only when active-layer thickening has become deep enough so that the entire summer-thawed layer does not refreeze in the winter. Once this has occurred, by definition, deeper permafrost thawing occurs through talik expansion, and thus active-layer thickening does not contribute directly to permafrost thawing at that time. (c) River and coastal erosion increases through time, but after some maximum effect, this mechanism decreases to zero because the influence of the river and coastal processes is limited in spatial extent. (d) Thermokarst development is represented as a threshold process; the first peak is conceptualized as the loss of Little Ice Age ice. Thermokarst subsequently declines in importance until enough thawing has occurred to affect Pleistocene-age ice, typically somewhat deeper in the soil profile, causing the second peak in thermokarst development. This time course is conceptualized as the course of a single latitudinal band through time; if multiple latitudes are considered simultaneously, then more southerly and northerly regions would be on different points on the axis of permafrost thaw at the same time. The actual number of years these time courses take is not yet known and depends on the progression of climate change, but the range is on the order of multiple decades to centuries. Lastly, the importance of the different mechanisms relative to one another is poorly known. It is clear that river and coastal erosion are the most spatially limited. Here, active-layer thickening and talik formation together are shown as roughly equal, or somewhat greater, in importance to thermokarst formation, which is more restricted to areas with higher ice content.

Carbon leaving the permafrost may leave as CO2, as the more potent greenhouse gas methane, or be captured by vegetation or groundwater flows before it reaches the atmosphere. Methane is liberated (sometimes) by anaerobic reactions, while the product of aerobic reactions is CO2. This might seem to make anaerobic (low oxygen) decomposition the major villain, but the authors believe that it is actually aerobic environments which constitute the greater threat over human timescales, because the decomposition, even though it produces little methane, is so much faster:

Decreased microbial decomposition rates attributable to oxygen limitation in aquatic environments are, therefore, offset in part by the greater length of time spent in a thawed state, and by release of CH4 in addition to CO2. Based on (a) net C emissions from long-term laboratory anaerobic and aerobic incubations of various wetland soils (Bridgham et al. 1998) and (b) the global warming potential of CO2 and CH4 (IPCC 2007), a simple calculation suggests that aerobic decomposition has a greater feedback to warming on a century timescale, ranging from 1.3 to 6.9 times greater than the effect from the same soil decomposed in an anaerobic environment (table 1). This is largely due to differences in C emission rates: aerobic CO2 release is about an order of magnitude higher than anaerobic CO2 release, and about two orders of magnitude more C loss than anaerobic CH4 release (table 1).

Did that help? It didn't help me much. Better press on.

So imagine this pool of carbon, unfrozen and exposed to the world, but not immediately injected into the atmosphere. Microbes are doing what all nonphotosynthetic life does, taking up carbon and oxidizing it to derive energy. Respiration, in other words. This doesn't suck up all the carbon and burn it overnight. Unfortunately, there is a process rather famous for burning through fuel. 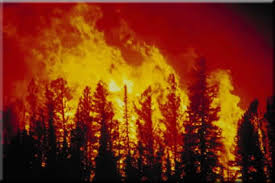 In addition to biological decomposition, disturbance by fire could be an important abiotic mechanism for transferring C thawed from permafrost to the atmosphere. Fire oxidizes organic C primarily to CO2, but also releases smaller quan- tities of CH4, carbon monoxide, and other volatile C com- pounds. Because organic C emerging from permafrost is typically located deeper in the soil profile when the active layer thickens, it is less vulnerable than surface organic C to burn- ing. However, extremely warm years, when large amounts of permafrost C thaw, are also more likely to have more extensive or severe fires than average. Model scenarios of fire in Siberia show that extreme fire years can result in approximately 40% greater C emissions because of increased soil organic C consumption (Soja et al. 2004). In combination with dry conditions or increased water infiltration, thawing and fires could, given the right set of circumstances, act together to expose and transfer permafrost C to the atmosphere very rapidly. Lastly, fire can interact with decomposition by creating warmer soil conditions and deeper permafrost thaw, which in turn promote the loss of C from increased microbial activity.

My take-home from this is, first, if you want to second-guess scientific conclusions in this area, better settle in for some long days at the library. This stuff is not simple. Second, we have a load of carbon coming our way, exactly how much and how fast to be determined (one estimate here) -- and after going over this article in detail, I have a better sense for why it's a hard number to estimate. Finally, the Brothers Grimm and Disney have it right: meadows are good; bogs are bad.
Posted by TheTracker at 3:03 PM