Fresh off comparing blog moderating to genocide, McIntyre is back with another denialist home run: 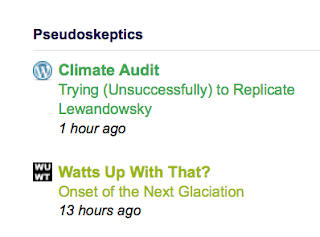 If you find it surprising that our former minerals consultant/professional pseudoscientist has already proclaimed the failure of attempts to replicate a study that has not even been published yet, there's a catch. Mr. McIntyre doesn't know what "replicate" means.

Replicating a scientific experiment means doing it again, and seeing if you get the same results. But McIntyre, who startled observers yesterday by not knowing what a pogrom was, is equally at sea when it comes to replication. He thinks it means repeating the analysis of the results. Really:

Is Lewandowsky et al 2012 (in press) replicable? Not easily and not so far. Both Roman M and I have been working on it without success so far. Here’s a progress report (on the first part only).

Lewandowsky carried out factor analysis on three groups of questions: free markets, CO2 and conspiracy, each of which will be discussed below. He used structural equation modeling (SEM) on the other science questions (cause and consensus).

Of course people can and do question and tweak the statistical analysis of scientific results. But to call that "replication" -- that's willful ignorance. Really replication, in this case, means that you conduct your own survey and see if your results show a positive correlation between climate denial and other conspiracy theories.

But of course real replication requires you to do some actual science. You might have to get up out of your chair, do some actual work, rather than endlessly carping about the choices other people made in their research. McIntyre instead chooses to pretend that science is simply playing with the data collected by others. That is basic science illiteracy from one of the "grand old men" of climate denial. I award him three and a half Goddards.
Posted by TheTracker at 2:13 PM